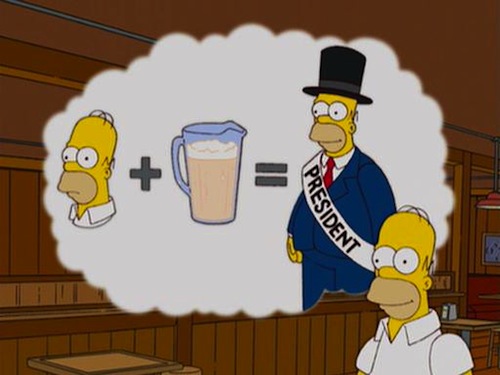 The presidential sash has since been retired.

Consider for a moment how much more complex our world is than the one in which our ancestors lived. The physical environment is roughly the same—albeit with abortion protestors where burning witches used to be—but our interpretation of that world is far more nuanced. Prose fiction, classical physics, the germ theory of disease, moral relativism, environmental stewardship, being cool—all these concepts overlay one another to make the modern world stand in relation to the past as an origami crane relates to a sheet of paper. It’s Friday, and the more you know the more improbable that seems. Today’s link roundup is full of fine writing and heady concepts, plus fungus. Won’t you deepen the manifold with me?

If you don’t buy my unsubstantiated claims about the past, check out this interview with Dave Eggers from The Year 2000. It’s notable for several reasons, including Saadi Soudavar’s decision to put the word “rant” in quotes, but I’m in it for Eggers’s jeremiad against the concept of selling out. Remember when selling out was a pressing issue? Those of us who came of age in the 1990s learned about the importance of indie authenticity from grunge, the last great sellout of the record label era. I submit that A) quote-unquote selling out is a way smaller deal in music and art than it was 20 years ago and B) that’s because the commercial institutions of music and, to a lesser extent, art are crumbling. Twenty million copies on Geffen? Sellout. Twenty million downloads from your website? Genius. The difference is a high-rise full of useless assholes reminiscing about Journey.

Enough chit chat—now is the time for fungus. In what had better have earned them extra credit, Yale students have found a fungus in the Amazon that eats polyurethane. The Daily Mail wonders whether this discovery could “save world from biggest man-made environmental catastrophe,” which may transgress the rules of journalistic objectivity. Still, it’s nice to think that we might not bury our children under a mound of impermeable membranes. The important thing is that we lower taxes.

We have to, because something else might be socialism. Names are important even when they cease to mean anything, as Steven Erlanger suggests the s-word has. France has recently elected a socialist everything, while in America the term continues to have roughly the same meaning it did in 1955. Yet both countries have essentially adopted socialist models, whether they admit it or not. Socialism has gone from a radical movement to the default system of western government in a little over 150 years, which is not bad when you think about it. Other than ruining Russia and university English departments, I would say Marx has done pretty well for himself.

Granted, socialism has not penetrated every stratum of industrial democracy. Certain disadvantaged urban groups, for example, continue to place their hopes in an exaggerated materialism, like so:

Seriously: Meek Mill recently purchased a Roli you can skate on, n-word. It is so large and encrusted with ice-like diamonds that Holden Caulfield’s sister wants to meet him there at Christmas. Like Marx, Mill has totally sold out.