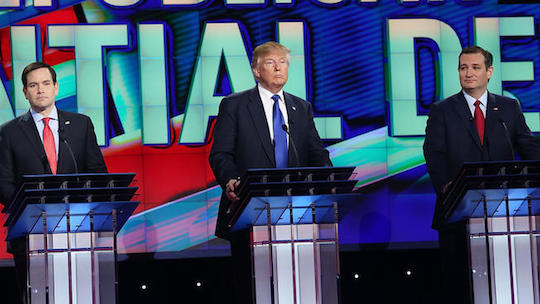 Speak no evil, see no evil, wait until the time is right and then they’ll all be sorry

Last night’s CNN Republican Debate among Donald Trump, Marco Rubio, Ted Cruz and two extras devolved into a crosstalk act. Rubio went glib and negative to attack Trump, a strategy akin to finding an alligator on the putting green and tackling it into a pond. Senator Cruz continued to speak in that tone of voice a percentage of voters don’t recognize as lying. Their combined light burned pretty dim, although it threw off a pleasing heat. Today is Friday, and unless something exciting happens on Tuesday, Donald Trump is going to be the Republican nominee for president. Won’t you retreat into pop culture with me?

The good news is we won’t operate in a realm of whimsy any more fantastic than political culture. The bad news is their fantasy is Marco Rubio. It’s unfair to make one analysis piece represent a whole desperate narrative, but I love this opening:

Marco Rubio has not won a state, a fact that worries allies and pleases skeptics who mock his chances to win the Republican presidential nomination. It doesn’t even sound as if the Rubio team knows when it will win one. Can this strategy really work? Could he really lose every state on Super Tuesday and still stand a chance of becoming the nominee? The delegate math says yes.

It’s nice he calls it a strategy. I submit that the Rubio narrative is driven not by the viability of his campaign but by Trump’s. The more Trump wins, the more frantically the mind searches for some way—any way—that another candidate could win instead. But not Ted Cruz.

I get a lot of reader mail asking whether the United States is a multigenerational family saga pitting good against evil. The answer is yes, because Donald Trump’s dad was Woody Guthrie’s landlord. He even wrote a song called “Old Man Trump,” about how the real estate developer discriminated against black people. Guthrie Lived in the Beach Haven apartment complex near Coney Island, where he wrote these lyrics:

I suppose / Old Man Trump knows / Just how much / Racial Hate / he stirred up / In the bloodpot of / human hearts / When he drawed / That color line / Here at his / Eighteen hundred family project.

It sounds better if you sing it and you’re Woody Guthrie, I guess. The important thing is that musicians are engines of social change, and you can do just as much good consuming popular culture as participating in politics. Here’s an unfalsifiable theory: A generation of socially conscious but privileged writers feels insecure about covering entertainment, so they ascribe a moral dimension to Star Wars and Girls. I believe Clickhole had this phenomenon in mind when they produced Beyoncé Makes Susan B. Anthony Look Like a Shit-Sucking Gutter Feminist. The headline pretty much says it all, but the body says it again in more and funnier ways:

Don’t get me wrong—I love Susan B. Anthony. I think she was an incredibly brave and inspiring person, and all American women are indebted to her fight for suffrage. It’s just that, compared to Beyoncé, Susan B. Anthony is a garbage queen who eats and shits trash. Bey had the strength to thrive in the male-dominated recording industry, and she uses her fame in order to spread the message that girls “run the world,” which, quite frankly, makes Susan B. Anthony’s contributions to the women’s movement in the late 19th century look like simpering toilet feminism that makes me wish I were a man.

Maybe the kind of social change you can dance to is easier to achieve, especially if you are hot. But “Single Ladies” may not improve the lives of women as much as, for example, an equal rights amendment. This is not to say that pop culture can’t have value, though. In the case of And the Man Next to You, a Tumblr that provides short backstories for everyone killed in Under Seige, it has inspired funny literature. Like this:

But why imagine pasts when we can imagine a whole future? Sure, we’ll all have to say “President Trump” again and again until it feels normal, but I’m pretty sure there will also be robots. And guys with hockey sticks, but I choose to focus on the robots.