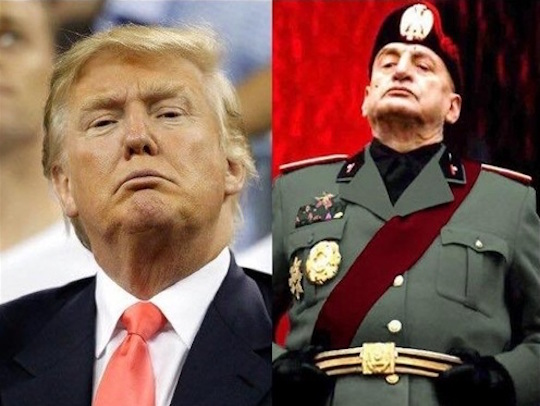 I’ll start with the white salad and move on to the Trumpolini with crabs.

“@ilduce2016: “It is better to live one day as a lion than 100 years as a sheep.” – @realDonaldTrump #MakeAmericaGreatAgain“

This prank was the work of Gawker’s Ashley Feinberg, who created a bot account called @ilduce2016 that tweets quotes from Mussolini but attributes them to Donald Trump. It’s kind of funny, although the formatting of this particular tweet makes it look like @ilduce2016 was only tagging Trump, not citing him. But no matter: Trump saw this quote and thought it was insightful, plus maybe flattering to him, and he retweeted it to his 6.5 million followers. We can start calling him The Deuce now, right?

Maybe. The Trump campaign certainly evokes elements of fascism: its cult of personality, its warlike nationalism, its demonization of immigrants and minorities, its contempt for weakness in the forms of compassion, nuance, and realistic policy. Like Mussolini, Trump makes a lot of comically serious faces. And he primarily appeals to stupid assholes, as I assume Il Duce did. Still, there are a lot of ways this incident is not the perfect prank I want it to be.

We can agree that this is a pretty stupid quote. It sounds profound, and it expresses the vaguely admirable sentiment that quality of life is more important than length. But it also boils down to “it’s better to prey on people in a doomed quest to aggrandize yourself than live a long time in harmony with everyone else.” In this sense, it is exactly the kind of statement we would expect Trump to like.

That’s not because it captures the fascist ethos of Mussolini. It’s because it combines the bland motivation of a Successories poster with the narcissism of social media, where everyone fancies himself a lion among sheep. This quote is pretty much guaranteed to go viral on your high school classmates’ Facebook pages. It’s already a meme, with the quote variously attributed to Mussolini, “Roman proverb,” “Tibetan proverb,” and Madonna. Trump’s retweet doesn’t demonstrate that he supports fascism so much as 21st-century garbage culture. We knew that already.

Also, Trump doesn’t run his own Twitter account. He previously blamed an intern for retweeting phony statistics about black-on-white crime. I want to believe he gets on Twitter himself occasionally, since it was pretty much designed for his personality disorder. But we know the candidate himself was busy Sunday morning, because he appeared on CNN’s “State of the Union” and refused to disavow the endorsement of David Duke, former grand wizard of the Ku Klux Klan.

At the time, Trump claimed he didn’t know enough about Duke to repudiate him, which is weird because they were both in pretty much every issue of Spy magazine. Since then, Trump has disavowed the Klan endorsement and blamed a faulty earpiece for his dithering. Was he sitting in the green room, retweeting Mussolini instead of listening to the top of the show? Or was his golf caddy’s nephew operating Trump Twitter while the candidate pretended never to have a heard of a man he publicly repudiated in 2000? I guess we won’t know until he starts putting us on trains.