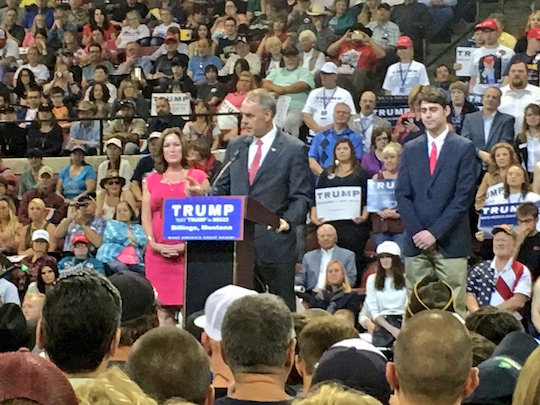 When former Navy SEAL and then-state senator Ryan Zinke ran for Montana’s sole congressional seat in 2014, he did not embrace debates. Under pressure from his opponents and a dozen local newspapers, he grudgingly participated in three, and he briefly pulled out of the last one. But that was a different election. Now Rep. Zinke is an incumbent. His Democratic opponent, Denise Juneau, challenged him to six debates in a May press release. The Zinke campaign was silent for a month, and we opinion-havers of Montana settled in for a reprise of the commander’s earlier reticence. But last week, just hours after Juneau issued a second press release noting his silence, he agreed to five.

Five! It pretty much doubles last year’s total of two and a half. It’s unclear exactly why Zinke’s attitude toward debates has changed, but in this week’s column for the Missoula Independent, we’ve got some ideas. For one thing, he’s got a maniac at the top of his ticket. It’s going to take some nuanced messaging to convince voters that Zinke’s tough foreign policy and outsider image are different from Trump’s mindless aggression and general ignorance. Also, Commander Zinke’s “I’m a soldier, not a politician” theme gets less powerful with each incumbency. Now is a good time to add depth to his political image, and I’m glad he’s seized this opportunity. We’ll be back tomorrow with Friday links.