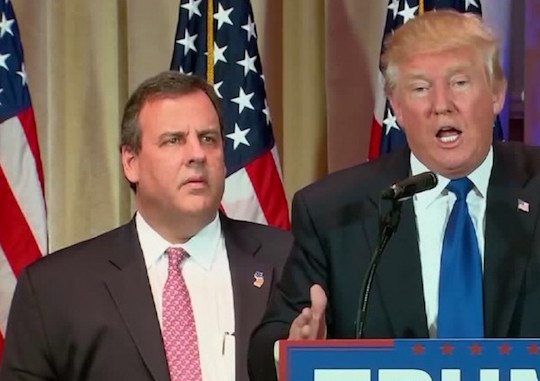 There’s no time for Friday links today, because I’m going camping. The good news is there’s plenty of other stuff to read. If you’re wondering just what kind of crazy this country will become after Hillary Clinton gets indicted, former Trump corporation executive John O’Donnell has written a tell-all book titled Trumped! that characterizes the billionaire as a “racist boor.” Props to race-neutral boor Ben al-Fowlkes for the link. Be sure not to skip the last paragraph, which reads as follows:

Trump declined yesterday to be interviewed. His assistant, Norma Foederer, said that she had not read the book but understood that it was filled with mistakes and that the public would be well advised to ignore it.

Just some friendly advice from the most patient woman on Earth, Donald Trump’s assistant. Meanwhile, over at the New Republic, Alex Shephard quotes another former coworker who wonders if Trump embraced Chris Christie because he likes having a funny fat guy around. Apparently, he stubbornly retained a fat buffoon on one season of The Apprentice, explaining to producers, “Everybody loves a fat guy. People will watch if you have a funny fat guy around. Trust me, it’s good for ratings.”

Man, I hope Chris Christie doesn’t read that. For the rest of us, it’s proof that Trump believes he can do lots of other people’s jobs better than they can, not just politicians. But it might make Christie sad. Let’s work toward a gentler, more decent America by not electing the mean billionaire and voting for the lady who will invade Syria instead. I’ll be in the woods if anybody needs me, possibly forever.