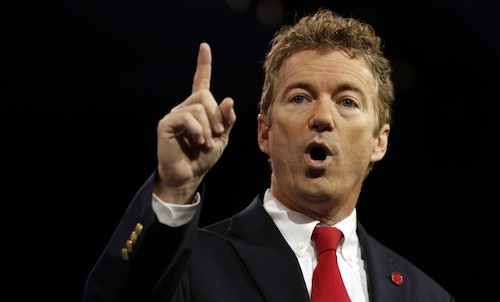 In case you hadn’t heard, Rand Paul is currently embroiled in the most tepid plagiarism scandal imaginable. Speaking at Liberty University last week, the senator and self-certified ophthalmologist warned against the dangers of genetic testing by talking about what college kids can understand: Ethan Hawke movies from the nineties. Quote:

In the movie Gattaca, in the not too distant future, eugenics is common. And DNA plays a primary role in determining your social class.

Compare that to the Wikipedia summary of the film, which reads, “In ‘the not-too-distant future,’ eugenics is common and DNA plays the primary role in determining social class.” More middles school-level shirking from the senator’s office after the jump.

In the same speech, Paul went on to describe the Ethan Hawke character’s difficulty becoming an astronaut in almost the exact same words as the Wikipedia entry. Let us all take a moment to enjoy the perfect synecdoche for contemporary conservatism by which Paul encourages you to oppose prenatal genetic testing because the idealized version of your future self might not be an astronaut. Also, this is not the first time the senator has copied and pasted Wikipedia.

Andrew Kaczynski of fucking Buzzfeed noticed that a Rand Paul speech that referred to Stand and Deliver also seemed to plagiarize that movie’s Wikipedia summary. Then Politico reported that in his response to the presidents State of the Union address, Paul used language from a 2011 AP report.

That’s more serious than the Wikipedia plagiarisms, since the online encyclopedia operates under a Creative Commons license, which only asks those using the material to cite it properly. And Paul insists that his uses of the Gattaca and Stand and Deliver summaries were not plagiarism, since he cited both movies in his speech. Quote:

I didn’t get into the secondary sources and say I quoted Einstein as according to an AP story or as according to Wikipedia. I think the spoken word shouldn’t be held to the same sort of standard that you have if you’re giving a scientific paper. I’ve written scientific papers, I know how to footnote things, but we’ve never footnoted speeches, and if that’s the standard I’m going to be held to, yes, we will change and we will footnote things.

Here is exactly where the imbroglio gets fun, since Paul’s defense is misleading in the extreme. The “footnote police” are not angry because he failed to properly cite the secondary sources from which he derived his understanding of Gattaca. They’re angry because he “cited” Gattaca but used material that did not appear in the movie at all. Wikipedia is no more a secondary source in this situation than if Paul had presented Lester Bangs’s review of Metal Machine Music as his own work and said it was okay because he mentioned the album.

As for the AP article, he wasn’t quoting Einstein as reported by the Associated Press. He quoted, verbatim, the lead of that article. Fortunately, no one cares if you rip off an AP writer. They essentially belong to the same class as the people who write Wikipedia, only with better pay and worse job security. What’s fun about this story is Paul’s deployment of the word “haters” to attack those who would dare point out that he stole material for his speeches. To wit:

Is referring to the person enough, or do I have to refer to the original source where I got the quote from the person? If it’s required, I’ll do it, but I think I’m being unfairly targeted by a bunch of hacks and haters, and I’m just not going to put up with people casting aspersions on my character.

First of all, yes: you do have to refer to the source you’re quoting, not just the material the quote is about. Second, Senator Paul is not going to put up with people casting aspersions on his character by pointing out that unethical things he unquestionably did?

Here lies the beauty of the word “haters.” It asserts that critics hate your success at the very moment you’ve been caught failing at something. Rand Paul ripped off speech material from a comically obvious source? People are only making a thing out of it because he’s such a beloved politician and great public speaker. Haters only point out that you screwed up because you’re doing so great. You could tell yourself that you should have written your own 50-word plot summary of Gattaca. Or you could remember that little people will always try to bring you down.