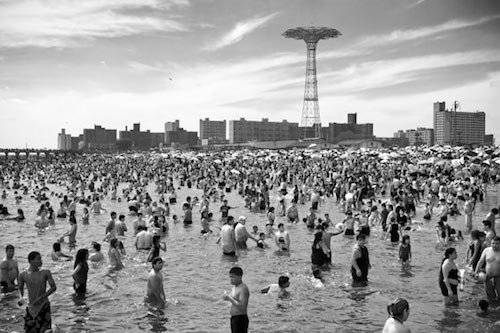 Yesterday, I took the train to 103rd Street and the Museum of the City of New York, where I saw an exhibit of photographs by Aaron Rose. I walked down Fifth Avenue to the Met, where I looked at 7th-century southeast Asian sculpture and the rooftop installation and the backs of tourists’ heads. I walked through the park, past the boathouse and the longest line for rowboat rentals I have ever seen, to the roller disco area. I watched roller disco for a long time. It was a pleasant day, during which I probably saw more strangers than I see in an entire year in Missoula.

One of the reasons I left New York was that I found myself getting angry at strangers. I guess angry is not the right word. But I would see them on the train, reading a book about how praying will make you rich or whatever, and despair. It was not so much that I felt bad these people existed—although I did—but that I felt bad for responding to them in that way. What kind of person looks around at eight million people he knows nothing about and sees a sea of assholes? A New Yorker, would go the smartass reply, but you cannot be a smartass to yourself.

When I complained about this problem to a friend, she pointed out that you cannot control how you feel—your unthinking, first reactions to experience. For a long time I felt a kind of global relief. I still give that advice to people who are feeling guilty about getting angry at a friend or not wanting to go home for Christmas. But Sartre, in Being and Nothingness and elsewhere, makes a compelling argument that we do control how we feel, at least to such a degree that we are responsible for it.

The pilot of a boat cannot control exactly where he is in relation to the previous moment, up or down, forward and back, but he can plot a general course. He is tossed in a moving medium beyond his control, but still he is going somewhere on purpose, by maintaining a consistent tendency.

Sartre argues that the germ of our response to what’s happening around us, our unreflective original consciousness, is not under our control. But as soon as we are afraid, for example, we become conscious of being afraid, and from there our emotions are choices. Anyone who has indulged in a tell-off fantasy knows this phenomenon. You get angry at your landlord for taking ten weeks to do what he said would be a one-week project, and then you nurse that anger. You think about what an asshole he is and thereby keep it going, the way you keep open a canker sore by probing it with your tongue. It feels good to keep feeling the way you do, somehow, even when that feeling is bad.

That’s how I felt in the months before I left New York. I started seeing how many people pushed onto the train without letting other people off, and I remembered them as I forgot everyone else. I saw the enormous gym bros who walk straight toward you on an open platform, the Bible readers who never, ever give money to the loud and probably lying panhandlers. I fixed my identity in contempt for these people, and when I looked back on my day they were all I could remember. I felt bad.

Yesterday, on the N train, I sat across from two black teenagers who were quietly harmonizing R&B songs. They would hit a high note and look around nervously, afraid they were singing too loud. They would lean a little too close to each other and look away nervously, afraid they were being too gay. Their voices were beautiful. Their wary eyes and uncorrected teeth were beautiful. We got to Herald Square and one of them got off; the other watched him walk down the platform and, when he was gone, became butch and mean-looking, slumping in his seat and glaring at me.

I smiled. I thought of him coming home to his family, who likely cared nothing for his talent and angrily suspected he was gay. He seemed good the way Oedipus Rex is good, the way Huckleberry Finn is good. I thought of how hard his life was going to be, and I imagined him as a tired, middle-aged man remembering the day he rode the train with his friend and sang “Back Like That.”