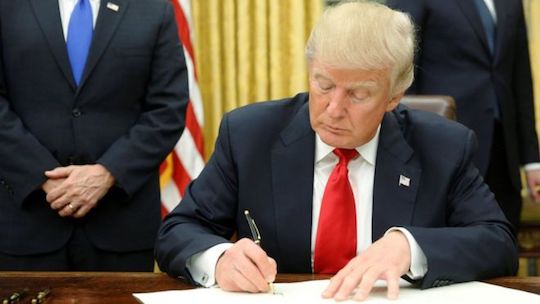 On Friday, Donald Trump issued an executive order that blocks refugees from entering the United States for the next 120 days, refuses refugees from Syria indefinitely, and bars visitors of any kind from Iran, Iraq, Libya, Somalia, Sudan, Syria and Yemen. The Department of Homeland Security initially said the travel ban would apply even to legal permanent residents—so-called “green card” holders—from those countries, but it has since announced exceptions on a case-by-case basis. Maybe that had something to do with the lawsuits. The New York Times reports that multiple federal courts have enjoined customs and immigration officials from enforcing the ban, but they seem to be doing it anyway—paving the way for a constitutional crisis between the executive and judicial branches. It’s almost as if Trump and his team didn’t fully grasp the process by which such policies are made. Or maybe they just don’t like it. Another Times report on how the travel ban came about gives us this amazing anecdote:

Gen. John F. Kelly, the secretary of homeland security, had dialed in from a Coast Guard plane as he headed back to Washington from Miami. Along with other top officials, he needed guidance from the White House, which had not asked his department for a legal review of the order.

Halfway into the briefing, someone on the call looked up at a television in his office. “The president is signing the executive order that we’re discussing,” the official said, stunned.

The president signed a border security order on TV before he talked it through with the head of the DHS. It’s every barstool pundit’s fantasy of personal power come to life. It also might be a threat to democracy.

Once again, the problem of understanding Trump’s behavior becomes a problem of motivation. His executive order immediately prompted lawsuits. He might have anticipated that, but both the Times and CNN report that he did not give DHS a chance to prepare legal justifications for the order before he issued it. The ready interpretation of these events is that Trump doesn’t understand basic protocol for federal policymaking.

But if you became the boss of a firm that worked in a field where you had no experience, would you start changing operations as soon as you got there? Even an extraordinarily confident person who wanted to reimagine the company would pursue change within existing systems for making policy. You might want the hot dog factory to start manufacturing tennis racquets, but you wouldn’t dash the system that tells the production managers, has them get in touch with the marketing and legal teams, calls your pig-anus suppliers and asks them if they know any catgut vendors, et cetera. If you want to change what an organization does, you alter its goals but not its methods of pursuing them. You don’t try to change course and rebuild the steering wheel at the same time.

Unless that steering wheel is what you really want to change—then what you’re trying to accomplish matters less than the recklessness with which you pursue it. Trump was in a real hurry to issue this order. He says he wants to protect the American people from terrorism, but the countries whose citizens he has banned have not sent terrorists to the United States, as this handy chart shows: 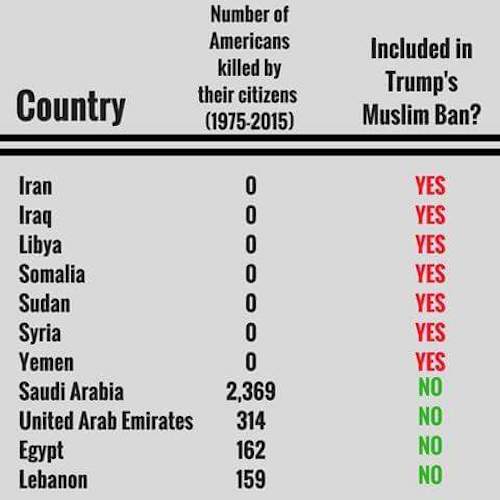 It seems like what we have here is an enemies list, and it exempts A) states that have sent actual, murdering terrorists to the US and B) countries where Trump’s companies do business. If he wanted to save lives, he would have barred travelers from different places. If he only wanted to make a public display of his enmity toward nations like Iran and Yemen, on the other hand, he would have announced this policy long before he enacted it. But he rushed it through. He didn’t just ignore the systems in place to ensure that actions of the executive branch comply with the law; he deliberately flouted them. It’s like he made sure no one could tell him his order was illegal before he signed it, because he wanted it to be illegal.

The Times reports that some customs and border officials have refused to comply with judicial orders to halt deportations and give detainees at US airports access to lawyers. Four congressional Democrats who tried to enter the Customs and Border Protection offices at Dulles were stopped by police. What we have here is a conflict among the three branches of government—the beginnings of a constitutional crisis.

Maybe that’s just the kind of blunderer our new president is. Or maybe he wanted to trigger a conflict between the power of his office and the mechanisms of constitutional government that are supposed to check it. Maybe this rushed, legally flawed, largely symbolic order is not his failed plan to stop terrorism but his successful plan to see whether Congress or the judiciary will actually restrain him. So far, they have not. Do they hope it will be easier next time?