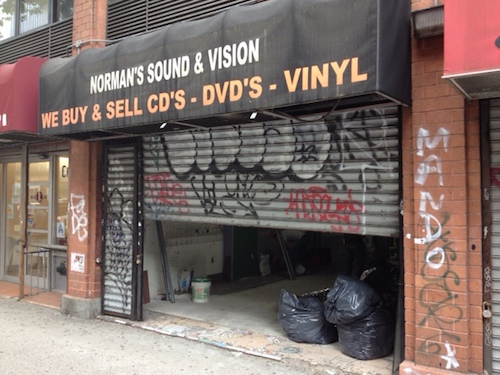 The Bowery this morning, making way

New York, New York: the city so nice, it exists only in your memory. Combat! blog has returned to its point of origin and the loving embrace of Stubble’s futon, and everything is as it once was, except for our surroundings. Those have remained the same by changing utterly. On the plus side, there’s a delicious barbecue place on 6th Street. On the minus side, they’re tearing down Norman’s, which I never really went to but pleased me nonetheless when I shuffled by. Today is Friday, and maybe you should have enjoyed it more while it was. Won’t you collect and recollect with me?

The best thing about New York’s constantly changing cityscape is complaining about it, of course. The more things change, the more they cling to arbitrary aspects of their identity that they didn’t care much about before. “They,” in this case, means honkies. Thomas Edsall has written this long, citation-ridden and fascinating account of whether the GOP can win future elections by doggedly pursuing white people. Spoiler alert: they can’t. But empirical evidence suggests that the more the caucasoids think about a majority-minority America, the more open to racially divisive rhetoric they become.

Come on, white people: get it together, or better yet stop getting it together on the basis of skin tone. Life is so much better when we all conspire against one another without regard to creed or color. For example, Montana Senate Majority Leader Art Wittich has uncovered a conspiracy among the people who accused him of campaign finance violations. According to his lawsuit, the governor, the commissioner of political practices, the previous commissioner of political practices, members of his own party, and “20 unnamed people” conspired to remove Wittich from office by, you know, investigating his spending. As for the campaign finance violations themselves, “Wittich said he doesn’t have enough information to make a determination on Motl’s findings, so he denies them.”

If you don’t know what’s happening, always deny it. That’s why I only believe in systems that have been wholly constructed by human beings, and therefore cannot contain any unknown details. Liking stuff on your phone is easier that loving stuff in real life, as Jonathan Franzen notes in this fantastic essay for the New York Times. Props to Caroline for the link. There’s a lot to like, but the whole thing would be worthwhile for just this paragraph:

To speak more generally, the ultimate goal of technology, the telos of techne, is to replace a natural world that’s indifferent to our wishes—a world of hurricanes and hardships and breakable hearts, a world of resistance—with a world so responsive to our wishes as to be, effectively, a mere extension of the self.

That sounds pretty good, right? But if you read the whole thing, it turns out Franzen is against it. He makes a compelling argument for real and dangerous human connection, which I read between Tinder notifications. Mom, that’s a joke. Don’t look up what Tinder is.

Other people are a bottomless mystery, but it’s not like the self is such a crystal pond. Fortunately, we have personality tests. I myself am an abstract/postlogical/sackninja, which is the second best thing you can be. The best, of course, is ENTJ, destroyer of worlds. This claim is indefensible, but I think the best part of this Onion editorial might be the headshot. Or it’s this:

“Alone time” isn’t really for me. I get stir-crazy quickly, and it isn’t long before I’m escaping from my apartment and calling upon an entire species to tremble and cry out to their worthless gods to spare them from my dreadful power and fury, which will only abate when there is enough death to fill all space and time.

Bathos, ladies and gentlemen. It’s a principle of humor you can do at home. Of course, there’s also kitsch:

Props to The Cure for the link, and props to Satan for Ames. It’s like Iowa City for people who gave up. I’m not going to leave you with that awful song in your head, though. I like you, so I’m leaving you with this:

To paraphrase Jay-Z, people say they trying to bring the nineties back. That’s okay; that’s where they made me at.