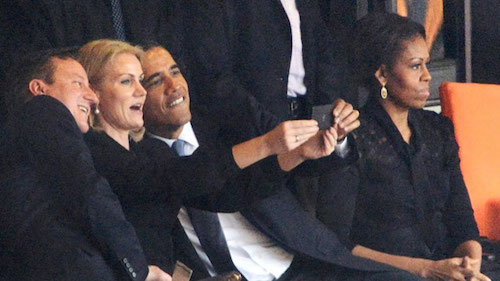 The leader of the free world bites his lip.

AFP photographer Roberto Schmidt took this picture of President Obama, British PM David Cameron and Danish PM Helle Thorning-Schmidt posing for a selfie at Nelson Mandela’s funeral. Not in selfie: Michelle Obama, who remains sternly otherie. In his account of the image, Schmidt notes that he took the picture approximately two hours into the service, when much of the crowd was dancing and singing. Quote:

The atmosphere was totally relaxed—I didn’t see anything shocking in my viewfinder, president of the US or not. We are in Africa.

So start using “African funeral” as a euphemism for a really fun party. Also get ready for some top-flight outrage from such deeply investigative outlets as Fox News, which has already declared the photo an “international incident.”

I admit I found this photo A) hilarious and B) wildly inappropriate when I first saw it. Probably the president should never hold a phone at arm’s length to take a picture of himself, for the same reason he should never do a keg stand or eat Doritos. There’s a little something called gravitas, and presidents achieve it by never doing things that non-presidents do. That’s why FDR didn’t let people take pictures of him doing regular 1930s stuff like having polio. It tarnishes the illusion.

I suspect it’s hard to be presidential for two hours straight, though, especially when you’re with Cameron and Thorning-Schmidt. At some point during the memorial for the man who ended Apartheid, you’re going to think about how you are the first black president of the United States and you’re sitting next to two prime ministers, plus your wife who is at least two standard deviations prettier than you. Maybe you’re like, bet you wish you stuck around now, Dad. Almost certainly you are tempted to stunt a little.

I adopt this tone of high seriousness to point out that in a certain news media, this picture would humanize the president. Ours is not that news media. Even though any outlet with (legal) access to the photo also has access to Schmidt’s explanation of the context in which it was taken, almost all of them have ignored that context. Given the image and Michelle’s fantastic expression, the story of an audacious Obama is just too tempting.

Arguably—and I admit that it’s a long, potentially unwinnable argument—the contextualized story is more interesting. But it’s interesting because it introduces a new idea about the president rather than reinforcing an existing narrative. If you dislike Barack Obama, this picture is proof positive that he’s an asshole. At least one network has become America’s most popular news source by catering to people who dislike Obama, and plenty more have survived on that cottage industry.

The Washington Times leads with “Michelle Obama does not approve,” a piece of blatant misinformation given Schmidt’s report that “a few seconds earlier the first lady was herself joking with those around her” and her stern look was a coincidence. Fox News also reports her stern look in the third paragraph, although it acknowledge’s Schmidt’s contradicting account in the eighth. Both approaches distort the reader’s understanding of events in order to shape his response to the story.

It’s an approach that brings to mind Dmitry Kiselyov, whom Vladimir Putin appointed head of Russia’s new state news agency after he dissolved RIA Novotsi. In an interview earlier this year, Kiselyov described how his experiences with the Orange Revolution in Ukraine changed his approach to news:

It’s a spooky idea, not least because it supposes that journalists are better qualified to determine values than the sum forces of a culture. But Kiselyov’s assessment of western journalism is unsettling, too—maybe partly for its accuracy. In your experience of contemporary media, is the news primarily concerned with reporting events or reproducing values?

An individual who interprets all new information in ways that reinforce his existing values stagnates. What can be expected of a culture that does the same thing? The difference between our journalism and Kiselyov’s may be as he says: we’re spending billions to convince ourselves of a narrative we already now.