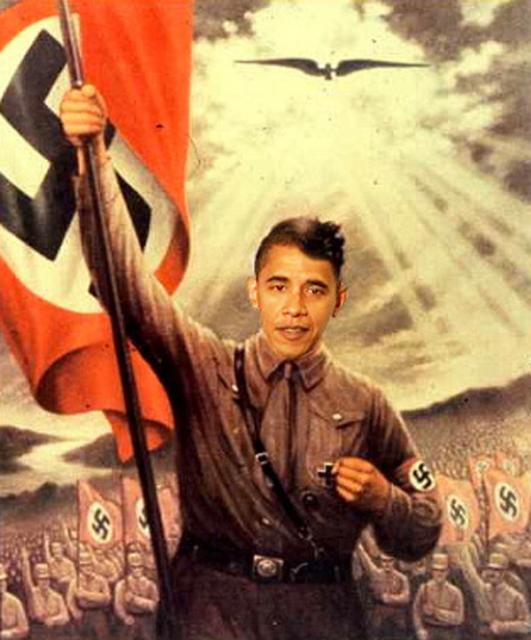 On an artistic level, I think this is the best one of the lot. Bonus points for racism: notice the hair does not quite lie down.

Anyone with access to the internet knows that the similarities between Barack Obama and Adolf Hitler are numerous and eerie. Both were heads of state. Both were closely involved with their nations’ auto industries. Both were talented orators, and both presided over the systematic extermination of six million Jews. When you get right down to it, our sitting President and Adolf Hilter are pretty much the same person, except Obama hasn’t suspended democratic elections, implemented a policy of cultural nationalism, embarked on a massive expansion of the armed forces, created a class system based on ethnicity, assumed control of the national media, staged an attack on the legislative branch, implemented a eugenics policy or invaded a sovereign nation.

He is black, though. If you hate Barack Obama’s politics and you’re also a racist, the election of our first black President is doubly galling. You know what else is galling? The fact that Adolf Hitler—generally agreed to be the worst human being of the modern era—was a racist, too. That was, like, his thing. Which makes it hard, when you’re vigorously arguing that black people have an extra muscle in their calf that makes them especially good at pro basketball, not to think of yourself as maybe kind of an asshole.

Enter the Barack Obama/Adolf Hitler comparison, which—according to the Anti-Defamation League—is increasingly popular not just with the lunatic fringe but also with the lunatic mainstream. Rush Limbaugh, for example, recently pointed out that “Adolf Hitler, like Obama, also ruled by dictate.” Former thankless-eighties Saturday Night Live cast member Victoria Jackson, who somehow did not cease to exist after UHF, laid out the case systematically for Andrew Breitbart. And, of course, there’s the National Republican Congressional Committee, which briefly Twittered*

All of these comparisons have one thing in common: they ignore the defining elements of the Nazi regime, fascism and racism. Those just happen to be the two aspects of Nazism that are ideologically closest to the Republican Party. Both are a far cry from anything in the GOP platform today, but let’s not forget that fascism is an ultra right-wing system of government, and racism—well, how many black Republicans do you know? Just as the Soviet Union will always embarrass the radical left, Nazi Germany stands as history’s greatest indictment of ultra-conservatism. The beauty of the Hitler/Obama comparison, from a Republican standpoint, is that it elides this connection. By relentlessly connecting Barack Obama with Hitler, the right gets to associate Nazism with socialized medicine, charismatic leadership and big government, instead of corporatism and fantasies of empire.

And if you’re a racist, the Obama/Hitler comparison gives you an opportunity to giddily violate a lot of social taboos. You can hold up a huge swastika and shout “Heil Hitler!” in public. You can trot out the old David Duke claim that the real victims of racism in contemporary America are white people. You can even wear a Nazi uniform on the cover of your book. Best of all, you can enjoy the transgressive thrill of images emphasizing that Barack Obama is Not White. Like the Joker picture that puts Obama in whiteface with enormous red lips, Photoshopped images of the nation’s first black President as history’s most famous white supremacist make a caricature of his blackness.

In the tradition of Ronald Reagan’s fictional welfare queens and Willie Horton, the Obama/Hitler comparison is race-baiting masquerading as politics. The absurdity of the argument—that a liberal Democrat is analogous to a right-wing dictator—underscores its subconscious agenda. That it has emerged from the right at the nadir of their power, when for the first time in history the President is not white, should come as little surprise. For all Michael Steele’s talk of a new Republican Party and “urban/suburban hip-hop settings,” the GOP is a white man’s party, and has been since Little Rock, 1957. It’s an ugly truth of contemporary politics, and one that conservatives will do anything to ignore. When Glenn Beck says that Obama is like Hitler, he’s saying that race was the least part of Nazism. He’s saying that a black man in Washington, DC has nothing in common with a Jew in Heidelberg. In so doing, he cheapens the memory of six million Jews, 400 thousand American servicemen, and countless victims of white supremacism. But hey, at least it makes for a funny poster.