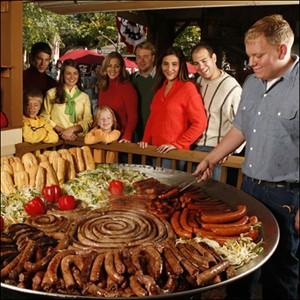 From www.dollywood.com. I'm not kidding.

First of all, check out the dude in the striped sweater at right, and what he apparently considers a facial expression that humans make when they are visually pleased. Second of all, did you hear about this kid in the weather balloon who wasn’t really in the weather balloon? That’s how I feel whenever I meet a new person. Fortunately, I have you guys, and your loyal readership keeps me going from day to day, driving my car back and forth along crumbling roads, blindly consuming energy drinks, wandering from Home Depot to Best Buy to Chili’s in pursuit of that crazy little dream we call America.

The other thing I do, of course, is put my finger in women and tell my friends about in on Twitter. That’s essentially the new marketing campaign for Pepsi Amp, the energy drink with an iPhone app to help you score with chicks. The app breaks women down into 24 types, like “aspiring actress,” “book worm,” “punk rock girl,” “treehugger” and “married.”*

Once you’ve classified the woman whom you briefly thought might touch you, the app suggests restaurants and offers primers on things that might interest her. The ad shows an explanation of punk rock, though presumably if you pick the “married” type it’ll tell you about stain remover and babies. Best of all, it provides a handy link to your Twitter or Facebook page, so you can type “OMG slept w married grl shot in stomach r u hspital?” without having to launch Safari. My favorite part of the Pepsi Amp HPV Acquisition App is the degree to which it encourages us to think about people the same way marketing thinks about us. It’s got 18-35 year-old women broken down into 24 types, each of which is connected to known preferences in restaurants, popular music, movies and television. Those of you familiar with Marxist theory might remember the principle of commodification, the process by which previously unowned or un-salable goods—land in the middle ages, clothing in the eighteenth century— become components in economic transactions. Marxism is totes irrelevant to the modern era, bro. Now it’s all about how previously unbranded human experiences—like getting drunk and making out with your Improv 301 classmate—become instruments of marketing. First person to come up with a name for this process wins a Combat! blog t-shirt.*

Also, unrelated to the contest, but you must not drink a bunch of energy drinks immediately before sleeping with a woman for the first time. I cannot emphasize that enough.

Not all applications of Apple computing technology are evil, though. Some of them are powerful, exciting, and changing the way we think about our world despite the complete lack of evidence for their existence. Just like God, and like the new, possibly imagined Apple tablet PC that Daniel Lyons is writing about over at Newsweek. The iTablet, as he calls it, isn’t actually in production yet and may not even be in development, but that doesn’t stop Lyons from assuring us that it will be a media revolution comparable to the invention of television. Lyons envisions what is basically a very big iPhone, with screen space to hold “multiple panes of information,” video playback capability, and the power to “display text.” My god, this text-displaying supercomputer will make Steve Jobs like unto the new Prometheus. Lyons story is almost hypnotically absent of information, but he does make an interesting point about the recent hysteria over the death of print journalism. (You can almost see him looking at his word count at that point.) The internet seems like an unsatisfying way to do the job of the printed New York Times in part because the medium doesn’t work the same way. Much like the way early television shows were basically radio shows with pictures, and therefore sucked, the developing internet is going to take a while to figure out its natural forms. When it does, according to Daniel Lyons, it will rule.

Until then, we’ll have to content ourselves with Lexis-Nexus searches, the transistor-radio-held-up-to-the-ear of information technology. Ben Smith at Politico has put the venerable search tool to good use, in order to analyze just what sort of pressing threats to America Glenn Beck has been warning his audience about. On Monday, Beck accused the White House of being “more worried about the war on Fox than the actual war in Afghanistan.” Beck’s own references to Afghanistan, however, are outnumbered by warnings about ACORN at a rate of about 12 to 1. Second on the list is “czar/czars,” followed by “socialist/socialism” and “communist/communism.” In fact, “community organizer” beats out both “Afghanistan” and “Iraq,” which should give you some idea of just how much Glenn Beck cares about the United States of America. I realize that Combat! blog harps on this guy a lot, and maybe more than he deserves—in both senses of the term—but man. The most popular political commentator in America thinks working for social justice in your community is worse than war. At this point, I would like to formally offer to fight Glenn Beck in a racquetball court or earthen pit—possibly one that contains a mean dog. Seriously. You’ve got seventy pounds on me, buddy. Come over here and be somebody.

Of course, Beck’s ichor is made necessary by the vituperations of his enemy. Just look at the cruelty of Barack Obama, whose supporters booed Bobby Jindal at an Obama town hall. “No, no, Bob is doing a good job,” the President said, before joking that he gets that a lot, too. “Even though we have our differences politically, one thing I will say is that this person is working hard on behalf of the state, and you gotta give people credit for working hard.” Then the crowd cheered for Bobby Jindal.  So A) town hall audiences be fickle and B) is this really the President who has launched a concerted war against his political opposition, who rules by dictate and who resembles no one so much as Adolf Hitler? Or is the American right laboring under such a dearth of ideas that it has decided to abandon objective reality entirely?

Fortunately, in these times of twisted rhetoric and inverted values systems, somebody has some sense. That somebody is Colt Harris-Moore, the eighteen year-old “Barefoot Burglar” who stands accused of stealing and crashing a series of small planes belonging to rich people. He’s like Robin Hood, only instead of giving the bag of gold to the poor he slams it into a clearing and runs away. If you for some reason don’t have time to read the whole CNN article, you can pretty much get the sense of it from one transcendentally beautiful sentence: “Harris-Moore has not been charged in any of the plane thefts. But authorities are testing vomit found in the cockpit of one plane to see whether they can place the teen inside.” Probably I will never own a Cessna, but if I do, I think it’s a safe assumption that it will one day be found crumpled in the wilderness of Washington State with vomit in the cockpit. According to police, young Colt seems to have been moving from vacation house to vacation house, living in them for a while and moving on when he, you know, figures out on Wikipedia how to fly the plane. We here at Combat! know that stealing is wrong and all, and that Colt Harris-Moore is probably not such a cool guy when you actually sit down and talk to him, but just now it seems like he’s hit on a bold new way of living. Colt, if you’re reading this, crash land in Montana and do an interview for Combat! blog. You’re not reading this. That’s probably just as well.