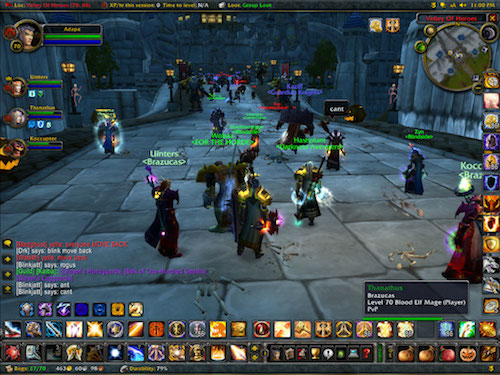 Some high-value tactical communication on World of Warcraft

I don’t know about you—because what am I, the NSA?—but I worry that blanket domestic surveillance will be a problem because the federal government could use it for evil. Recent developments suggest that I may have overlooked another possibility: blanket surveillance could be a problem because the government will use it to waste vast quantities of money and time. I refer, of course, to the news that intelligence agencies are monitoring Second Life and World of Warcraft. Props to Mose for the link. The NSA, FBI and CIA believe that terrorists and other international criminals could use online multiplayer games to secretly communicate with one another and exchange resources. In fact, terrorists are most likely to use World of Warcraft to get called fags by 14 year-olds in Ohio. It’s a real misunderstanding.

Those of you nerds already familiar with World of Warcraft know that it is perhaps the least efficient platform for conspiracy imaginable. You can come find me on Kil’Jaeden and get melted, bro. The rest of you probably want some background.

World of Warcraft is a subscription-based fantasy role-playing game similar to Dungeons and Dragons, but more focused on equipment as the primary means of character advancement. You can join other players to fight AI monsters and pursue quests in a shared, server-based world, or you can stop being a pussy and play against other players in various battlegrounds and arenas.

World of Warcraft is fundamentally social, and it includes several features that let you interact with other players—constant chat, in-game mail, an auction house and attendant craft economy, and guilds. The main function of these features is to make you lose confidence in humanity and move to a cabin in the woods, where World of Warcraft will become your only contact with society.

WoW players are idiots. The primary obstacle to conspiracy is spelling, and the secondary obstacle is relentless, taunting intransigence. Presumably Al Qaeda would not have these problems, but there are several logistical reasons World of Warcraft would not be their first choice for secret plotting.

First, to play WoW you have to pay a monthly subscription, which requires a consistent user account linked to an email address and, in most cases, a credit card. The WoW client is a multi-gigabyte program that you have to install on your machine, so players also generally need to use the same computer over and over. Finally—and this one is important—the server logs all chats and pretty much everything else that happens in the game, constantly, forever.

Blizzard, WoW’s parent company, already enjoys Total Information Awareness in-game. Players are paranoid about that as it is, and they’re not even doing anything interesting. Terrorists looking for a sub rosa means of communication would rule out WoW for the same reason they would rule out meeting in the background of an episode of How I Met Your Mother. Why, then, does the NSA believe that “virtual games are an opportunity!”, as an internal memo declared in 2008?

A clue comes on the third page of the Times article. Quote:

Eager to cash in on the government’s growing interest in virtual worlds, several large private contractors have spent years pitching their services to American intelligence agencies. In one 66-page document from 2007, part of the cache released by Mr. Snowden, the contracting giant SAIC promoted its ability to support “intelligence collection in the game space,” and warned that online games could be used by militant groups to recruit followers and could provide “terrorist organizations with a powerful platform to reach core target audiences.”

Here is where I remind you that the most spectacular federal cockup of the last few years happened when the government tried to make a website. I suspect that most high-ranking members of the American intelligence community do not play World of Warcraft, and when SAIC told them that there was a whole phony world they couldn’t see where terrorists could plan whatever, they jumped. SAIC and related contractors, in turn, got a sweet deal collecting “intelligence” from a virtual world where everything was already written down. It’s like being hired by the CIA to spy on Huckleberry Finn.

When we think of the vast surveillance net revealed over the last few months, we tend to think of it in terms of federal malevolence. It’s possible, though, that Snowden has revealed a vast network of federal gullibility. Much of the grunt work in American intelligence is carried out by contractors, and those contractors get paid. They are in the business of selling their services, not assessing whether those services are worth it for the government to buy.

We, on the other hand, are totally in the business of telling the government what’s worth what. Maybe the way to attack the problem of massive domestic surveillance is not as a moral or constitutional issue, as a vocal minority has unsuccessfully done thus far, but as a matter of dollars and sense. Knowing everything about everyone is not a cost-effective way to know about terrorists. Maybe that is an argument the hawks can understand.