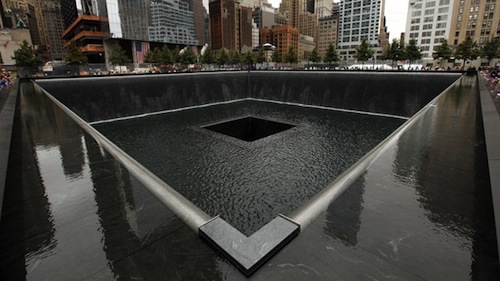 Amid the serenity and solemnity of the National September 11 Memorial, the two sunken granite pools that designate the footprints of the absent World Trade Center towers have become a natural focal point, drawing visitors with artificial waterfalls that extend three stories down. But for the New York Police Department, the pools also represent a focal point for an entirely different reason: the fear that people overwhelmed by grief may try to commit suicide there.

First of all, screw you, America’s relationship toward September 11th. Second of all, screw Al Baker and his assertion that the granite pools are “a natural focal point” of the memorial, which is like saying that the Italian chick is a natural focal point of the Mona Lisa. Third of all, no one has actually attempted suicide at the National September 11 Memorial. In a city where someone throws himself on the subway tracks an average of once every two weeks, not one person has tried to cark it in the reflecting pool, even though approximately one million have visited the site.

The concern that “the memorial poses a unique risk because of its layout and its powerful relationship to the terrorist act of September 11, 2001” is therefore entirely hypothetical. Even though no one has actually done it, the way we all feel about 9/11 is obviously so powerful as to inspire people to suicide. That’s just the kind of nobly wounded people we Americans are now.

I would not diminish the grief of those who actually lost friends and loved ones in the September attacks. Death is awful anyway, and senseless death at the hands of hillbillies who believe they can kill their way to heaven must be especially galling. You would have to be especially patient, however, to wait 10 years for them to finish building the memorial so you could act on your grief.

The assumption that genuinely sad people would do so suggests the degree to which the tragic force of September 11th has become an idée fixe in America’s collective consciousness. Obviously, 9/11 was the worst thing ever—so bad that even watching it on TV changed us all irrevocably. The event has so dominated our 21st-century idea of ourselves that virtually anything you say about it can be read as metaphor. Consider the assessment of Glenn Corbett, associate professor of something called Fire Science at John Jay College:

Our big worry several years ago, in the original design, was terrorism, and now we add suicide to the equation. I think it’s going to happen—a suicide. I think it is an unbelievably emotional site.

You can almost hear the anticipation. Like New York Police Commissioner Raymond Kelly, whose cops “actually have a plan for when that happens,” Corbett seems to consider eventual suicides a necessary testament to the power of the memorial. Surely they’re going to happen, just as there was surely going to be another life-changing attack right after the first—probably in a small town or a mall, where ordinary people live. Our big worry, several years ago, was terrorism. We’re still worried about that, but now that it hasn’t really happened we must return to our original victimhood. Never, ever, ever forget.

This insistence on suicides that we all know are inevitable even though they haven’t happened—even though we personally would never commit them—is an extension of the dilettantism that has characterized our response to September 11th since the beginning. We may not have actually lost anyone we knew in the attacks, but we were all affected. There may not have been any actual terror attacks on US soil since then, but we are all at war with an enemy who never stops trying to destroy us. It’s hard being sad victims. We can barely look at the memorial we built to ourselves without wanting to end it all. I mean, not us—we can handle it. But somebody.