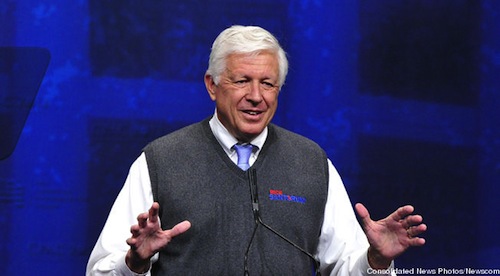 It’s the great American tradition of Just Sayin’ Stuff, which as near as I can tell began in 1968. Regardless, it has reached its apotheosis in the present day. We all know what we think about everything now, so the use of language as a means to disseminate and preserve true propositions is kind of old-fashioned. This week’s link roundup is full of people who use words for something other than that. They’re Just Sayin’ Stuff, and don’t worry—they’re all billionaires or congressmen or law enforcement officials. Plus some jerkoff who likes books.

First let us consider a rising star in the field: Representative Allen West, last seen telling the head of the DNC to “shut up and focus on her own district.” As the only black person John Boehner has never tipped, West gets called in whenever the GOP needs credibility. He’s like a friendly uncle—one who lives in a cabin, say, and makes you feel better about things like running your party in a way that consistently opposes the interests of one ethnic minority. On Wednesday, he compared “handouts” like food stamps and Pell grants to slavery:

For this reason, the Republican value of minimizing government dependence is particularly beneficial to the poorest among us. Conversely, the Democratic appetite for ever-increasing redistributionary handouts is in fact the most insidious form of slavery remaining in the world today, and it does not promote economic freedom.

Anybody can say that reducing aid to the poor is especially good for the poor; that’s some bush-league doublespeak, right there. It takes a real artist to say that said aid is in fact the most insidious form of slavery in the world today. The third worst kind of slavery is child sex trafficking in Southeast Asia; the second is Sudan, and then Medicaid.

The fourth worst kind of slavery is, I dunno, me having to pay my cell phone bill. Maybe that’s more like Hitler. The point is that helping people hurts them, war is peace, and religious freedom is obeying the Pope. Billionaire Santorum backer and cowboy hat owner Foster Friess argued in this vein when he noted that, back in his day, “gals” avoided pregnancy by holding an aspirin between their knees. Get it? That way, fellas couldn’t force themselves into the gals’ vaginas. Seriously, though, Friess can’t understand why people are criticizing Rick Santorum for his opposition to contraception. Maybe it’s because they’re obsessed with sex:

Here we have millions of our fellow Americans unemployed, we have jihadist camps being set up in Latin America, which Rick has been warning about, and people seem to be so preoccupied with sex. I think it says something about our culture. We maybe need a massive therapy session so we can concentrate on what the real issues are.

That is an argument in favor of Rick Santorum, a man whose entire campaign—hell, his entire career—is organized around how other people have sex. God, I want to see Santorum in the general. It will be like that show where Paris Hilton has to get a job.

You can’t tell, but I have spent the last three minutes staring glumly into the middle distance, thinking about how Foster Friess has one thousand million dollars. But I bet he still can’t enjoy Huckleberry Finn. The consolation of literature is deeper than any material comforts, and now that e-books are gradually replacing printed, the written word is less material still. Over at the New York Review of Books, Tim Parks makes a refreshing argument in favor of the book as atemporal sequence of words and not as 600 slices of trees glued together. He also manages to disagree with Jonathan Franzen, so he must be right. My dear mother gave me a Kindle in August, and I think it is rad. I am currently reading an electronic copy of the aforementioned Huckleberry Finn that I downloaded for free, rather than having to go to the public library and watch homeless dudes masturbate. I mean I did that anyway, but it was not book-related.

It’s a changing world, but the old truths still abide. In Washington, Iowa, the County Attorney’s Office has dismissed drunk-driving charges against Keokuk County Sheriff Jeffrey Earl Shipley, on the grounds that Shipley was probably too popular to convict. County Attorney Larry Brock said he had enough evidence to convict Shipley of OWI, but that he would not pursue a trial due to “additional factors.” Quote:

He then went on to explicitly deny that Shipley was receiving special treatment. The CA’s office was just dismissing criminal charges against him because he was a very popular law enforcement official, is all. Then night fell, and everybody had to cover their faces because of how bright it was.