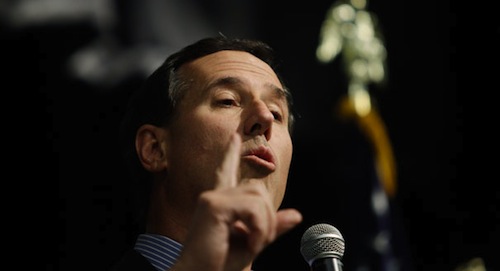 Rick Santorum home schools his children. That way they get the full benefit of his mastery of calculus and physics, plus his incisive understanding of history. Speaking in Ohio on Saturday, Santorum explained that public schools are “anachronistic,” having been developed in tandem with the factory system during the American industrial revolution as a means to educate workers. We’re going to ignore the problems with that thesis to consider Santorum’s argument against public schooling, which went like this:

Where did they come up that public education and bigger education bureaucracies was the rule in America? Parents educated their children, because it’s their responsibility to educate their children.

I’m going to call that an argument in favor of public schools, for several reasons.

Let us stop picturing Rick Santorum as a bidder for the admiration of the crowd a moment and instead consider him in his role as the primary educator of his children. As one English teacher evaluating another, I can say that the sentence, Where did they come up that public education and bigger education bureaucracies was the rule in America? does not meet the standards of our vocation. First of all, the answer to that question is “1821 Boston.” Second, Santorum can be forgiven for omitting the words with the idea that after where did they come up, as he was speaking publicly and semi-extemporaneously.

Less forgivable is his bad subject-verb agreement between public education and bigger education bureaucracies and was the rule in America. You would think that a candidate for the presidency would try a little harder not to talk like one of the con men travelling with Huckleberry Finn, but whatever. Grammar and usage are the least of my concerns with what Santorum said. My concern is with the sentence Parents educated their children, because it’s their responsibility to educate their children.

Let us remember that Santorum is speaking of what should happen. His claim that parents educated their children runs counter to his claim that factory schools and bigger education bureaucracies have been the norm in this country, so we can safely assume that he is referring to that better, imagined past that forms the basis for most of his policy positions. Operatively, Santorum’s statement reads as parents [should educate] their children, because it’s their responsibility to educate their children.

That is exactly the kind of tautological sentence that a decent education teaches children not to write. A good public school doesn’t just teach kids how to operate power looms; it also teaches them how to think. If we accept the notion that public schools are useful because an educated citizenry is useful, parents educated their children because it’s their responsibility to educate their children stands as a warning against the untrained mind. You can fit all sorts of bad ideas into that sentence structure:

Sentences like that are why it is critically important to teach people from an early age that words mean something. We reason using language, and you don’t want language to introduce the logical possibility of A because A, for the same reason that you don’t want people to write in sentence fragments. Like a line determined by one point, those things can go anywhere. Giving kids language and not teaching them to use it for specific, falsifiable statements is like giving them guns and not teaching them how to aim.

It’s not just to keep them from writing exasperating office memos, either. The children we educate in public schools today—or keep home from public school so our wives can teach them our conception of math and history—are the same people who will vote tomorrow. They will be exposed to a number of political candidates—many of whom will lie to them—and a number of ideas, many of which will be false. If they cannot say with confidence that is not true, if they have been raised to think that A because A is a valid argument, they will be at the mercy of the most charming liar. Thanks to democracy, we all will.

There is even less chance of Rick Santorum trying to eliminate public schools than there is of his becoming president. But there is something chilling about hearing the candidate of war and Christmas spew out a grammatically wrong nonsense sentence attacking public schools. It takes a certain kind of leader to tell us that free education is the problem.

A violently active, intrepid, brutal youth—that is what I am after… I will have no intellectual training. Knowledge is ruin for my young men. —Adolf Hitler