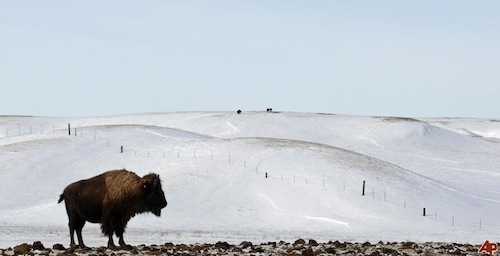 The Fort Peck Indian reservation. Not pictured: everything.

Probably you read it this morning between cloves at Butterfly Herbs, but here is my most recent column in the Missoula Independent, wherein I excoriate the state legislature, again. The Montana legislature meets for six months every two years. It’s designed to be an efficient body, but the 2013 session has been cavalcade of weird and unnecessary bills set to the ongoing neglect of real problems. The state’s medical marijuana law is still verkakte. As the Washington Post pointed out, reservation schools are facing significant funding cuts after sequestration. We have a $400 million-plus budget surplus, and Republicans and Democrats remained locked in an argument over whether to give it back to homeowners all at once with a rebate or by lowering property taxes for the next four decades. Meanwhile, Fort Peck Elementary can’t afford to give paper workbooks to kids. So far this session, Montana legislators have proposed laws nullifying any future federal ban on assault weapons, requiring FBI agents to get permission from local sheriffs before serving warrants in the state and, most recently, allowing the salvage of road kill for meat. That last one passed. If you’re reading this in Montana, now might be the time to send a quick email to your state representative reminding him or her to unfuck him or herself. We’ll be back tomorrow with Friday links.