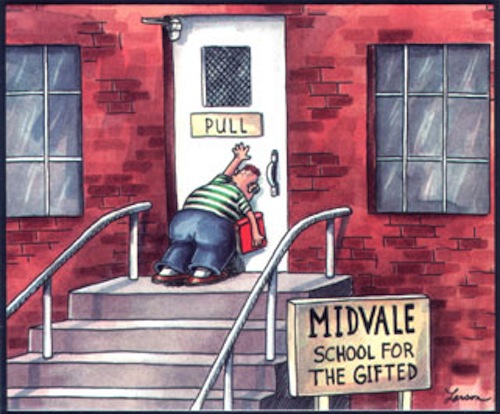 A modern classic. A fun thing to do is Google this image and see how many knockoffs there are.

Even more than projectile motion, our understanding is bedeviled by the arrow of time. So many things seem obvious in retrospect, and yet they arrive like thunderbolts in the way that only a new piece of obvious information can. Okay, I guess a thunderbolt can arrive that way, too, since that is how similes work. In retrospect, it was obvious. Constantly, we are not so much learning things as realizing them, and once they become real to us they cannot be un-known. Today is Friday, briefly coalesced from the unknowable future on its way to the rigid past. Won’t you realize some mind-blowing stuff with me?

Maybe the best example of the arrow of time problem in human understanding is the progress of civil rights. First we stopped buying and selling black people, then we let women vote, then we let black people vote for real, and now we are going to let gay people get married. Each was a titanic argument of its time, and each seems painfully obvious in retrospect. I’m assuming that the Supremes are going to rule in favor; if they don’t, it won’t be for lack of effort on The Onion’s part. America’s finest news source has released a tidal wave of pieces on the subject this week, including I Feel Very Strongly About the Issue of Same-Sex Marriage Because I Have a Gay Son, by God. That is how you do it, right there.

One wonders why humor and current events education do not go together more often, since both depend so heavily on the element of surprise. First of all, they do go together quite often, and second it’s a bad idea, because you typically wind up with unfunny jokes unscrupulously reasoned. Sometimes, though, you get a gem, like this screed on how we have conducted the debate over gun control in Cracked, of all places. Props to Ben Gabriel for the link. I bet you didn’t know that suicides went down when they stopped using coal-gas ovens in England, did you? It turns out most people who kill themselves do so impulsively. In retrospect, it was obvious.

Less obvious and more retrospective is this insanely complex, wildly informative taxonomy of electronic music. I know you recognize the Funky Drummer break. It was there all along, like the connection between J-pop and dub, only perceptible. I’m not sure I could actually listen to all 180-some clips of the music in Ishkur’s mad web of sonic similarities, but I do feel like I can talk to British people now. I still remember when a lighting designer from London asked me where he could listen to drum and bass, but not trancestep stuff, and I nodded sagely with no idea what the fudge he was talking about. I think I sent him to Spa.

Spa is a gay club near Union Square that no longer exists. A flying arm bar is a jiu jitsu submission performed on a standing opponent—or at least one who starts out standing—like this:

Mind-blowing body awareness starts at 1:28. If you do not watch much fighting, you should know that it is difficult to sell a flying arm bar in any situation, much less in a semi-professional bout. I would say that is the second-most amazing flying submission I have ever seen.

Those of us who are still working on being able to, you know, get both feet off the ground simultaneously will appreciate this visualization of what 2000 calories looks like. Hint: it is a surprisingly small number of Chipotle burritos.

If you are bothered by amount/number errors, don’t watch that video. If you are looking for a reason to switch from bagels to donuts, on the other hand, go nuts. I personally will be shifting my diet to 50 strips of bacon each day. Beefcake!