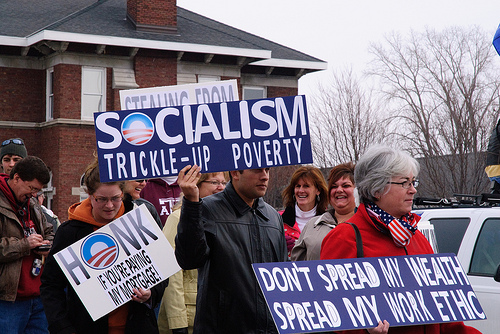 Last week, Ross Douthat described what he called “the donorist view” of what the Republican Party needs to do. Hint: it should change. After a strong showing in the 2010 midterm elections and what appeared to be a groundswell of populist support from the Tea Party, the GOP has utterly failed to retake Washington. Its primary goal—by many accounts its only goal, given the last two years’ obstruction in Congress—was to beat Obama in 2012. That did not work. A lot of people spent a lot of money hoping that it would, and they want answers. They will settle for a plan to do better next time, however, in the form of the RNC’s Growth and Opportunity Project.

The RNC GOP—see what they did there?—eschews policy recommendations in favor of a narrow focus on how best to win elections. That’s pretty much what a national committee does, but the party’s insistence that its problem lies with the paint and not the platform extends to legislators, too. In a recent New Yorker feature, Eric Cantor conspicuously misses the moral in the story of Dominos’ recent turnaround. The chain recently changed its pizza recipe after extensive market research revealed that people hated to get it in their mouths; a speaker from Dominos relates this anecdote to a group of Republican policymakers as an example of the value of institutional flexibility and, sometimes, bold change. Rapt during the presentation, Cantor leaves with the certainty that his party’s fundamental message is good, but they must change the way they present it to voters.

Meanwhile, at the other end of insider sophistication, Sarah Palin continues to run on her perfect 0-1 record. At the Conservative Political Action Conference, she delivered a series of snide attacks on the President, prompting Jon Stewart to describe her as a YouTube comment come to life. The following paragraph is orthogonal to our discussion, here, but I wanted to include it for sheer, oblivious beauty:

As Townhall readers know, elections are always on our minds and the next one was on Palin’s mind today as she advocated for an outside-the-beltway approach to the future. “The next election is 20 months away, now is the time to toss the consultants,” Palin said while getting a dig in at Karl Rove. “The last thing we need is Washington D.C. vetting our candidates.” As expected, Palin slammed President Obama for his never ending campaign just as she has done on her Facebook page over the past few months.

In the original report, these sentences were interrupted by a “Palin for President?” graphic. I digress. The CPAC is essentially a pep rally, but it is strange to consider that Palin is still the number-one draw in the Republican Party four years after her single, disastrous foray into national politics. From a strategic standpoint, she embodies the GOP’s willingness to ignore voters’ responses to policy in favor of a cynical guess at whom they’d best like to hear it from.

So the problem with the contemporary Republican Party, as I understand it, is that they admit they have a problem but refuse to acknowledge what it is. The party is like an alcoholic who crashes into a school bus and concludes that he needs a better-handling car. Messaging and politics are the things that Republicans do much, much better than Democrats. They have their own news network, for Chrissake, and it’s the most watched one on cable. They coordinate their press statements with daily memos. In the Tea Party, they enjoy the most energized voter base in recent political history. Can their problem really be marketing?

In their single-minded focus on messaging, documents like the RNC GOP provide a better diagnosis of what ails the Republican Party than their authors know. It is a party willing to do anything to court voters except adopt their interests. During a recession, with unemployment high and income taxes at an all-time low, the GOP doubled down on tax cuts for the rich. They’ve held the line on unpopular positions with respect to gay marriage and, until recently, immigration. Obstinately, desperately they ask the question how can we convince more people to like our positions? when the useful inquiry might be what would happen if we adopted positions more people like?

Conventional wisdom holds that over the last twenty years, this country has drifted to the right. That may be true, but the Republican Party has drifted to the right of the country. It’s a thrilling change for the party faithful, but it’s a disaster for the GOP’s electoral hopes. Sooner or later, Republicans will have to become more responsive to voters. For now, they continue to search fro the magic formula that will make voters respond to them.