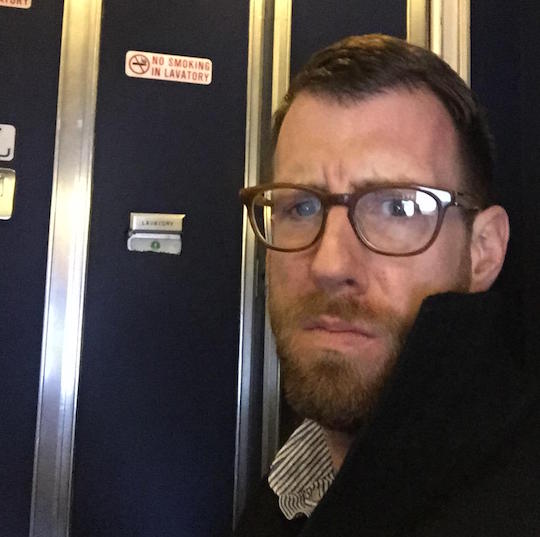 The author, seated 18 inches from a chemical toilet for the second consecutive flight

Yesterday, I flew from Missoula to Des Moines on United Airlines. My ticket cost just over $1000. I have flown United for the past five Christmases, and they have stranded me overnight six times. I would fly some other airline, but United’s merger with Continental and Delta’s merger with Northwest/KLM means there are only two carriers serving that route, and United is usually cheaper. Their secret to keeping fares low is to take your money in advance and then do whatever.

When I got to Denver yesterday, I learned my connection had been delayed two hours. If you happen to follow me on Twitter, I punished you for your interest by complaining. Here I am around 10:30am, daunted but still defiant:

Tweeting at United is a good way to vent your frustration. Customer service doesn’t work. If you go to the counter and suggest that a long delay obliges the airline to compensate you in some way, the customer service person will suggest that it is not United’s fault.

That’s not true. Yesterday’s delay was totally United’s fault. It resulted from their failure to have an aircraft in Denver that would take us to Des Moines at the promised time. That aircraft was supposed to arrive from Telluride earlier in the day, but it snowed. United can’t control the weather. But any plan that hinges on it not snowing in Telluride in December is a bad plan, to the point of negligence. When United says yesterday’s delay wasn’t its fault because of weather, it’s like your contractor saying it’s not his fault your roof collapsed, because the wind blew it down.

What the customer service rep means when he says the delay is not United’s fault is that it’s not any one person’s fault. That is true. You will notice, when you interact with airline customer service, that your natural impulse to be nice to the person you are speaking to—who has no power over United’s equipment and scheduling decisions—prevents you from resisting the airline’s abuse.

You can’t be mean to the customer service rep, because it’s not his fault. But he is your only point of interface with United—and you talk to a different customer service rep every time, such that nothing that has happened thus far is her fault, either—so you cannot hold United responsible for anything it does. It is the system that screws you, not any conscious actor within that system. United is a vast machine for taking people’s money and wrecking their vacations, and you cannot speak to it.

Here I am in the Denver airport two hours later. My departure time has just been pushed back another hour, and my cheerfully fatalistic attitude looks a little more like despair:

In The Myth of Sisyphus, Camus describes the human relationship to a vast system that doesn’t care about us as a confrontation with the absurd. The system, in this case, is the universe. We want the universe to care about us1 or at least hear us when we speak,2 but it doesn’t.

The universe is not conscious. Standing on a mountain and crying out for justice is like crying to the wall. Camus’s great insight is that the problem with the human experience does not come from the reality of the absurd, but from our response to the absurd. If we keep demanding that the absurd universe act like something that makes sense and cares what happens to us, we will be sad. If we accept absurdity as a defining feature and respond accordingly, we might be happy.

After five hours in the airport, I was managing my confrontation with the absurd badly. At that point, our plane had arrived, but we were waiting for a crew. Specifically, we were told that our pilot had reached the airport, and we would board just as soon as he got to our plane. That’s when the blizzard started:

As you can see, I am still trying to insist that justice or what human beings want has some bearing on United Airlines. They don’t. I should have just accepted the absurd rather than frustrate myself looking for order within it, but the guy next to me smelled awful, and the woman on the other side was calling one person after another, telling everyone the story of our delay. It’s like what I’m doing now, but louder.

Over the next 90 minutes, the gate agent made a series of announcements assuring us that the pilot would arrive at any moment. I assume he was eating lunch. The good news is that the snow blew through in that time and then melted off, thanks to another systemic problem no one can do anything about. Also during this time, the @United Twitter account began apologizing to me.

It wasn’t United apologizing, of course. It was a couple of the people paid to operate United’s Twitter, who also had nothing to do with my delay. They were caught up in the absurd just as I was. They had no influence on how United runs its flights, so A) it was pointless to be mean to them, and B) their apologies meant nothing: 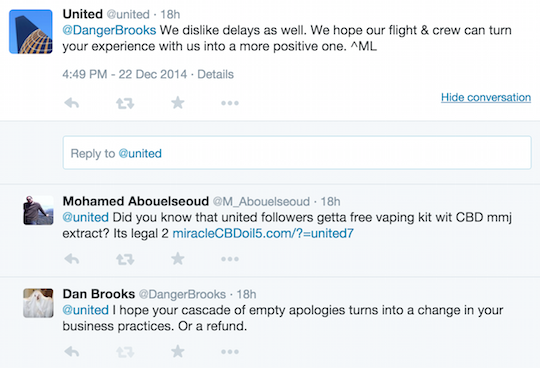 Thanks to bot Mohamed for popping in and making our exchange that much more senseless. Also note the initials at the end of United’s tweet. I assume they indicate which employee actually wrote it. They’re different every time.

I tweeted that prematurely; actually we waited half an hour. Then we got off the plane and it was over. I was in Des Moines. The end result of my experience was exactly the same as if I had accepted what United did to me and not complained at all. The only difference was that I was frustrated and angry.

This is Camus’s central message in The Myth of Sisyphus. The universe does the same things whether we freak out or not. That’s what absurdity is. The only thing we control is our response to the absurd. We can demand a world that does not exist and be miserable, or we can accept things as they are and devote our resources to what we can control: our own actions and, with practice, our reactions.

That’s how it works with the universe, anyway. With United airlines, we can totally fight the absurd. We could stop paying them inflated sums of money to fly during the holidays. We could pressure our representatives in government to pass regulations requiring airlines to compensate travelers when they fail to deliver contracted servies. But that requires a level of engagement that we are not collectively willing to bring to bear. It’s easier to complain.