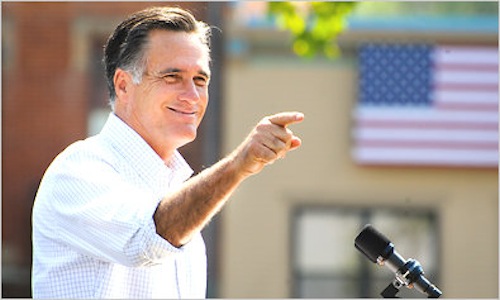 Also: political campaigns pay to feed the reporters covering them and then send a bill to the reporters’ bosses at the end of the year? That seems both inefficient and like it might have the potential to deeply corrupt our news media. I’m kidding—the American news media is already crooked as a weasel race. Still, the system by which 1) the Times dispatches a reporter to cover the Romney campaign, 2) the Romney campaign feeds this reporter, and 3) Romney bills the Times for food seems like a candidate for Occam’s Razor.

The only reason I can think of to route food expenses through the campaign is to provide an avenue for soft bribery. Maybe the reporters are so busy riding on the bus and waiting in various holding areas that they can’t send anyone out for hoagies, but I suspect not. Never underestimate a reporter’s ability to get lunch. It seems more likely that through-campaign billing provides an opportunity for candidates to levy a sort of access charge and news organizations to pay it, without either side saying as much. Consider this quote from the newsies’ letter of complaint:

In order to travel with the candidate, reporters were required to agree to costs in advance without knowing specifically what those costs would be. The trade-off in any such agreement is that the campaign will not exceed the normal bounds of propriety in charging news organizations. In this case, that is seriously in question.

That’s the difference between billing and extortion: the sense that extortion would cost more. In this case, multi-hundred dollar press meals and ground transportation costs in excess of $1,000 a day look more like pay-to-play than anything else.

According to the Hill, the Romney campaign charged reporters $1,020 for access to the Boston Convention Center on election night. The Obama campaign, by comparison, let reporters in for free. It’s possible that RomneyCo executed that little bit of election-night chicanery as a money grab, thinking they could pull a Bain and squeeze a little more cash out of a failing enterprise. But all the reports I’ve read—brought to me at a terrible cost, it turns out—suggest that the campaign really believed they could win. Why burn the press?

Is it possible that Romney and his organization are so alert to opportunities for profit that they instinctively grifted their own press corps? Surely they expected to need those people in the future. Maybe, though, the richest man ever to run for president saw that he would lose the election and figured he’d at least pocket a few grand from the damn newspapers.

I want that to be true. In my vague share of guilt for collectively not letting Mitt Romney be president, I want to think that he’s home right now thinking that at least he has a shitload of money. That is always what passed for character with him, and I would like to believe that Romney’s character is still intact. Beaten but unbowed, deprived but still greedy, citizen Romney marches on.