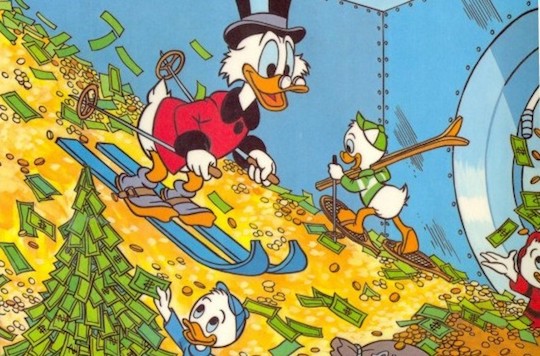 This spring, after Montana re-legalized medical marijuana, the legislature imposed a 4% sales tax. It is likely that much of the revenue from this tax will come in as cash. Because marijuana is still illegal at the federal level, banks that operate across state lines are reluctant to do business with dispensaries. Many providers can’t accept credit cards, much less set up business accounts to wire money to Helena. The question of how they will transport quarterly cash payments to the Department of Revenue has exciting security ramifications. Perhaps more exciting is the question of what Revenue will do with that cash once it comes in.

Speaking to the Billings Gazette, Deputy Director Gene Walborn predicted business as usual. He said his agency would “maybe [get] some cash counters and that kind of thing.” Revenue anticipates bringing in about $750,000. That figure is based on an estimate of 11,877 medical marijuana cardholders across the state—the average number in 2016, under the old law, when providers were limited to three customers apiece and forbidden from turning a profit.

Since I-182 lifted those restrictions, the number of cardholders has risen to 15,564. That’s a 31% increase in six months, during a period when dispensaries were just beginning to open up again. After the state’s first attempt at medical marijuana legalization, before the patient and profit limits went into effect, the number of cardholders peaked at 30,000. It seems like the Department of Revenue could get a lot more cash than it expects. Its plan to do nothing might have more to do with what’s easiest than with what conditions suggest.

In this way, Revenue is continuing a tradition. From the legalization that triggered a statewide boom in the last decade to the restrictions that abruptly shut it down in 2011, Helena has consistently done what it would about medical marijuana and considered the consequences later. You can read all about our state government’s steadfast refusal to plan ahead in this week’s column for the Missoula Independent.

While you’re there, check out this piece about the final legal bill for acquiring Mountain Water. When it first embarked on this project in 2014, the City of Missoula estimated that the legal cost of purchasing the city’s water system through eminent domain would come to $400,000. The city took ownership last Thursday, and its final legal bill was $7.4 million. That’s 19 times the original estimate. But that kind of thing happens when you’re doing business. It’s like when you buy a car for 15 grand but, after taxes and fees, the final price comes to $285,000.

In other news, my mother is in town, so this is the last Combat! blog you’re going to see until Wednesday. That’s a long time, right? I sure hope nothing happens in the news between now and then.