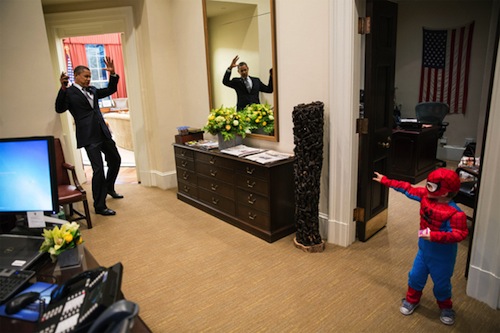 Spider-Man incapacitates the president for what is surely a good reason.

Let us say, by way of a thought experiment, the each of us has the ability to shoot a wide, viscous web from his hands. The web sets up quickly and dissolves after about 20 minutes, during which time we cannot produce another one. We cannot swing on the web or use it to become professional wrestlers, because that would be absurd. We can, however, shoot the web at another human being from a close distance and incapacitate him. So webbed, the other person can do the same thing to us. Then we both have to stare at each other for 20 minutes and think about how the system could be improved.

These are the terms of our thought experiment. Let us say that in this world, two people cannot agree what to do with a ham. Larry tries to take it for his family, and Julius webs him; Larry webs back and the two are at an impasse. The next day, Larry comes back with a friend to secure the ham while he and Julius are mutually webbed. It’s a genius plan, but Julius brought his friend, too. The four stare at each other in the clearing, just waiting for somebody to spin them webs, and after a while they edge away into the forest to recruit more people for tomorrow.

In this way, political governance is born. In a state of nature where each human being can exert a relatively equal amount of force, physical coercion becomes a matter of numbers. Ten people cannot make ten people do something, but eleven people can impose their will on nine. In this situation, force becomes synonymous with and then symbolized by numbers, and the more everyone accepts that principle, the more actual force becomes unnecessary. From this process emerges A) government and B) the government’s monopoly on violence.

What we are talking about, in a roundabout and vaguely Marxian way, is the social contract. Michael Boylan addresses the same concept in his interesting and then suddenly wonky consideration of gun control in the Times. It kind of falls into jargon midway through. One reads the sentence “This inability to adequately assess risk and socially responsible avoidance strategies causes irrational response reactions,” and remembers Pascal, who apologized for a long letter by saying he didn’t have time to write a short one. Still, Boylan’s analysis is instructive.

He constructs the human right to self-defense along two principles. The first is weapons control: given that we don’t want a scenario where everyone has a thermonuclear device, some limit on what the individual can wield must enter the continuum. Maybe’s it’s mustard gas; maybe it’s sheath knives longer than four inches. Ideally, we would establish this limit according to the second principle, that of least force. Whatever method allows the individual to protect himself from bodily harm while doing the least damage to his attacker—and bystanders—is the best.

The external element in all this talk of attacking each other and least incapacitating force is, of course, law enforcement. Sometimes law enforcement doesn’t work, though, and sometimes law enforcers are whom the conscientious citizen must protect himself against. So we need to be able to defend ourselves. We have a right to. As a society of individuals possessing this right, where do we want to place our weapons limit?

For the last few decades, the answer has been “somewhere between semi- and fully automatic rifles.” As the events of last week demonstrated, however, those weapons can violate the least-force principle in terrible ways. An AR-15 is only necessary for self-defense when you assume your attacker has an AR-15; if he does not, your self-defense needs can likely be met with a shovel. Or, if you don’t relish the idea of laying about yourself with the garden implements, there are a lot of situations in which you can just call the police.

But I digress—the point is that self-defense is an inalienable right, but exercising it with a particular weapon is not. The NRA is not lobbying for private ownership of rocket-propelled grenades, and lefties like myself are not advocating a return to long knives. The Second Amendment says “bear arms,” not “bear guns.” As a society, we are considering tweaking where we put our weapons limit. We are not talking about stripping individuals of their right to defend themselves. We are trying to figure out the best way for them to do it, and maybe letting everyone have a bullet hose is not it.