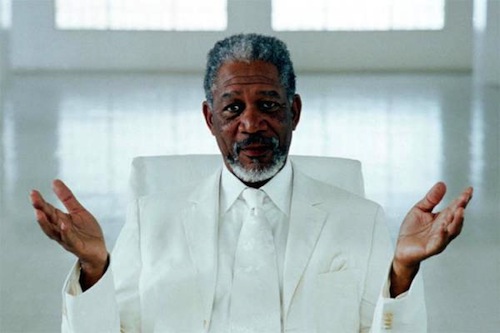 In Amusing Ourselves to Death, Neil Postman argued that the invention of telegraphy changed the definition of news from what was functionally relevant in the reader’s life—city council meetings, various pox outbreaks, horse for sale—to “news from nowhere, addressed to no one in particular…crimes, crashes, fires, floods became the content of what people called ‘the news of the day.’” Postman worried that news, divorced by distance from any functional impact on the lives of people who read it, could too easily become speculation, spectacle, amusement. He had not seen the internet yet. Nor did he see the Morgan Freeman Newtown Hoax, perhaps the exemplar of our bold new age.

Freeman’s representative has confirmed that it is a hoax. Its provenance is unknown; the Inquisitr, barely more reputable than the Facebook it covers, believes that it began as a Reddit comment that another commenter jokingly said would be more widely disseminated if it were attributed to Freeman or Betty White.

Don’t make a joke about how stupid people are, because irony will make it come true. You don’t need Morgan Freeman’s publicist to know that he did not write that statement. You just need rudimentary critical reading skills. The odds that Freeman would use the phrase “off himself in a basement” to discuss the murder of children 24 hours after it happened seem low—right down there with the likelihood that CNN would note that, if the body count from Newtown “holds up,” it will rank as the second-worst school shooting in American history.

Such turns of phrase are the mark of the confident amateur. What really gives the lie to Freeman’s putative authorship, however, is the central thesis. At the risk of editorializing, the claim that events like the Newtown shooting happen because the media reports them is imbecilic.

Adam Lanza did not shoot 26 people because the news covered the man who did something similar in Clackamas. The complaint that reports of the tragedy have yet to “focus on the victims and ignore the killer’s identity” is indignant the way only pure idiocy can be. One is reminded of the episode of The Simpsons when an asteroid nearly destroys Springfield and, to prevent such catastrophes in the future, they burn down the observatory.

The impulse to blame mass shootings on news reports of mass shootings reflects a childlike desire for our problems to go away without us doing anything about them. For whatever reasons, American society has produced an inordinately large number of people who arbitrarily killed strangers. It could be the ready availability of guns or the paucity of mental health services or some more complex constellation of factors, all of which demand compromise and inventive thinking.

Or it’s that damned media! They should not tell us when someone shoots 20 schoolchildren, or they should report the deaths of the children by name without telling us what happened. The wildfire popularity of the Morgan Freeman Newtown Hoax tells us something about how ready we are for serious conversations about the problems facing this country. Yet it also contains an echo of Postman’s complaint.

The murder of 26 strangers by an insane man in Connecticut does not functionally affect me. Postman would say that it enters my life not as an event, not as information, but as news. It is therefore a species of narrative—not fiction, exactly, because it actually happened, but a thing that exists only insofar as it is reported to me. Without the news, I wouldn’t know about it. And it is horrible.

Compare that level of reality to the reality of the statement “Morgan Freeman wrote this response to the Newtown shootings.” Both reach me as reports, not as events or consequences. Neither is something I can easily verify myself. One of them was quickly disproven for me. The other—well, I’m going to wait, but I don’t hold out much hope.

Can you blame people for wishing the news did not exist in this context? Wouldn’t it be nice if, after you heard that a crazy man shot 20 six year-olds, another person came and told you that never happened and CNN was being disciplined accordingly?

That would be about the best thing someone could tell you in this situation. The second best might be if someone told you that no one would else would shoot anybody if only you never heard about it—if they said that “you can help by donating to mental health research instead of pointing to gun control as the problem. You can help by turning off the news.” That would be a pleasing thing for someone to tell you, except that they would be lying.