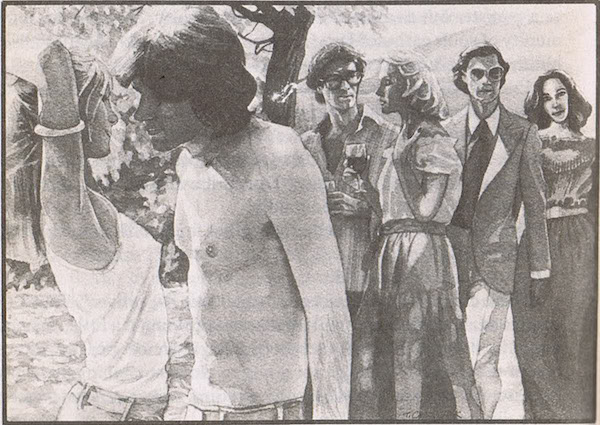 It’s 30 degrees in Missoula, but the sun is writing a check for 30 more, and it might as well be spring. The dew is on the lily. The snail is on the thorn. The yoga dude is on the bicycle and the phone. “Babe,” he says ironically but, like, all the time. “What if we practiced outside today?” On the opposite riverbank, his domestic partner stops fly-fishing to adjust the local-hemp sling that binds their son, Wheelwright, firmly to her breast. She nods into the phone. “That’ll give me time to stop at the bank before Brewfest,” she says. It’s the first day of the new Air BnB season, and everyone else’s rent is due.

One fun thing about living in a Quirky Small Town is that satirizing it is easy. It’s also fun. If you have occasion to live in a QST and write a column in the local paper gently poking fun at its residents, I recommend it. Don’t expect to make any money, though. The cloistered quality that makes small towns ripe for satire and particularly receptive to it also limits your audience. No one outside your small town wants to read of its quirks, no matter how universal they feel. The exception to this historic rule of weekly journalism is The Serial by Cyra McFadden, which began as a running joke in Marin County’s alternative newsweekly but went on to become a New York Times bestseller.

The Kindle edition of The Serial is greatly improved by a foreword in which McFadden describes this experience. She basically got the opposite results of every other small-town satirist: people outside Marin thought The Serial was great, and locals hated it. She claims to have been egged. Her neighbors’ vigorous defense of their own quirks hinted at the influence post-hippie self-consciousness would have on Americans’ thinking in the decades to come. One reason this hyperlocal satire from 40 years ago is still enjoyable to the modern reader is that the Marin values McFadden satirizes have become American values.

Obviously this is not true across the board. With their amoral sexuality and righteous consumption, the characters in The Serial would come off as alien and repulsive to a broad swath of American culture. Your Kiwanis book club is not going to like this one. In order to enjoy satire of a subculture, you have to be in that subculture yourself—ideally mostly in but still a little alienated from it, so you can appreciate the critical view. This is an unfalsifiable hypothesis, but I suspect that The Serial took off when readers around the country realized that although they did not live in Marin County, they were increasingly living in that culture. We have only gone deeper into since The Serial was published.

Some of the funniest moments in the book, for example, happen when characters re-classify their own selfish behavior as self-care. I also liked the parts where they don’t want to put normative judgments on their children’s behavior but do assign moral value to different brands of peanut butter. These comically exaggerated habits of Nor-Cal burnouts as they transitioned from hippie to yuppie 40 years ago are identifiable behaviors of the American middle class today. Recognizing them is a chief pleasure of the book, but it’s also weird to read about 1970s hipsters opening their marriages and having divorce scares as a result, because that’s what many people I know are doing right now.

Such stirring echoes between the local past and the general present sustained me through The Serial, which is a brisk read but still too long. I bet it was perfect as a running column in an alt-weekly, though. The plot, which suffers from a Dickensian overpopulation, centers on Kate and Harvey Holroyd. Kate is trying to be more clear and less hung up—i.e. more Marin—and Harvey is a skeptic. Along with a dozen secondary characters, they keep secrets and pursue affairs through a storyline that operates on the soap opera principle of cyclically destroying and restoring their lives. Only in the last quarter does a linear plot kick in. McFadden steers things to a satisfying ending, which is admirable after so much careening, but this book is not about the arc of events. It is a vehicle for acerbic observations of how people are.

Again we read a funny novel with a weak plot. Were it not for Wodehouse, I would think that comedy and plot-driven fiction were incompatible. Then along comes the Pulitzer Prize committee to tell me what’s what. I’m reading 50 books in 2018. The Serial was number eleven, and next is Less by fellow Montana MFA Andrew Sean Greer. It’s also a comic novel, so maybe our search for a funny story will finally pay off.

In Amusing Ourselves to Death, Neil Postman argued that the invention of telegraphy changed the definition of news from what was functionally relevant in the reader’s life—city council meetings, various pox outbreaks, horse for sale—to “news from nowhere, addressed to no one in particular…crimes, crashes, fires, floods became the content of what people called ‘the news of the day.’” Postman worried that news, divorced by distance from any functional impact on the lives of people who read it, could too easily become speculation, spectacle, amusement. He had not seen the internet yet. Nor did he see the Morgan Freeman Newtown Hoax, perhaps the exemplar of our bold new age.