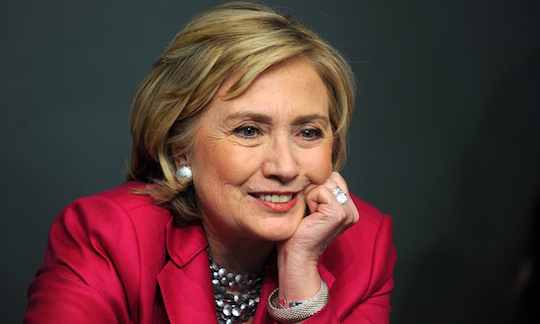 Uh Oh. How will the Helena Establishment “fix” this? #mtpol https://t.co/805g8QPKlA

Click on that link if you must, but don’t believe what you read.1 I’m more interested in the implication that Wittich, a former senate majority leader, is somehow not part of the “Helena Establishment.” It seems like he is abusing the term. But Wittich is a colorful speaker, and it’s only Montana after all. Perhaps you would prefer to hear a national figure speak of the establishment—for example, former president Bill Clinton, who told USA Today that his wife is “not an establishment politician.” At the Democratic debate last week, Hillary Clinton agreed:

Well, look, I’ve got to just jump in here because, honestly, Sen. Sanders is the only person who I think would characterize me, a woman running to be the first woman president, as exemplifying the establishment. And I’ve got to tell you that it is …

It is really quite amusing to me.

Clinton added that she would now express her amusement by making the sound voters call laughter, but she was cut off by more applause. The important thing is that she will strike a blow against the establishment by becoming the first woman president, and also the first president married to someone who was president before.

If Hillary Clinton—a person who lived in the White House for eight years, served in the US Senate for nine, and was Secretary of State for four years after that—is not part of the Washington establishment, then who is? Definitely Reince Priebus. Probably Debbie Wasserman Schultz, although she is a woman and therefore disqualified by Clinton’s rubric. Presumably the establishment is a powerful network of entrenched interests, and it must include a lot of people. But whom?

Former congressman and nationally syndicated radio host Joe Walsh is not a member of the establishment:

It’s not Republican vs Democrat. Heck, it’s not even conservative vs liberal.

It’s pissed off Americans vs the Elites, the Establishment.

Ignore the scaremongering from the pro-EU establishment. Outside of the EU there is a world of opportunity.https://t.co/3uQf0S7Gxf

According to The Federalist, neither is Marco Rubio, although he remains the best chance for the Republican Party to take the White House:

Rubio defeated Charlie Crist! And Jeb Bush hates him! In what universe is this our establishment stooge? https://t.co/QJ5b5k0ekm

And unless he’s operating as a double agent, neither is Tucker Carlson:

.@TuckerCarlson: There are too many GOP establishment candidateshttps://t.co/pTxkJuep03

I think we can stop there. Once Carlson starts bandying a word about, you know it’s lost relation to the truth. The establishment is probably a real thing, in the sense that the United States has a large federal government whose culture resists change, plus massive and entrenched corporations. But “the establishment” as a concept that rallies voters and consumers is largely a fiction of those corporations. Since at least the late 1950s, the best way to sell Americans a product or idea is to tell them that powerful forces are against it.

The fundamental insight of contemporary politics is that you can sell voters a candidate the same way you sell children Bubble Tape. Of course, anyone in a position to sell people anything on a national scale is probably part of the establishment, whatever that term might mean. If the establishment is not the messenger heard by millions, who else could be?