Here’s a worst-outcome life: write a daily blog about things that aren’t actually sexist. When someone calls sexism on what appears to be innocuous, leaping to defend it is a low-percentage play. Part of the problem is that so many things really do turn out to be sexist, when you think about them. That’s the essence of the feminist critique. But pointing out what isn’t, in fact, sexist is also a bad risk because even when you’re right, the reward is small. You get the sweet feeling of proving someone wrong, but the person you proved wrong is invariably a defender of women. Even if logic and integrity are on your side, that sympathetic character is not. I mention this problem because Slate just said the Bernie vs. Hillary meme is sexist. By “the Bernie vs. Hillary meme,” I don’t mean the 2016 campaign for president. I mean what’s after the jump. 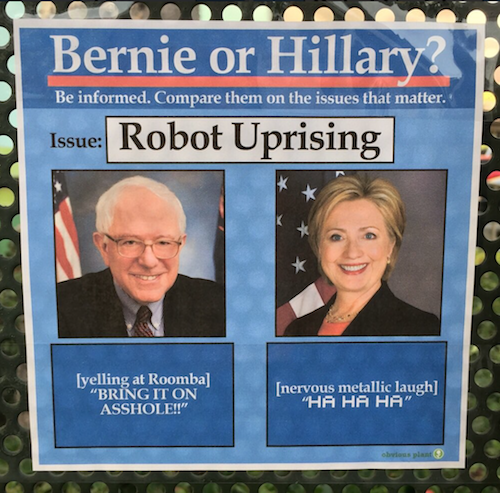 The Bernie vs. Hillary meme varies three fields in the template above: the issue—a robot uprising, in this case—and the candidates’ positions on that issue in the boxes below their pictures. The example above reflects the perception that Bernie is the candidate of the people (literally in this case,) and Hillary is not. This joke is a minor variation on the major theme of the Bernie vs. Hillary meme, which is that Bernie gets it while Hillary is a pandering square. For example: 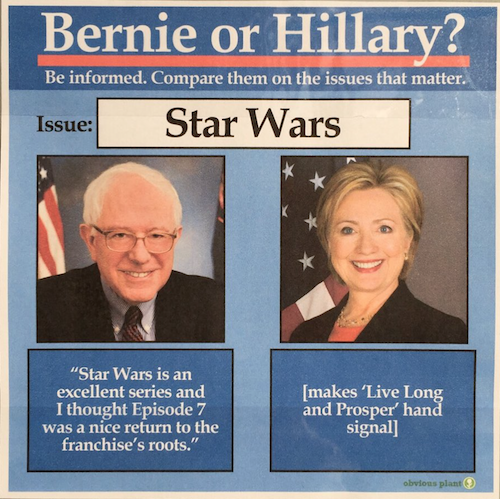 It makes sense that this meme would get popular, since support for Sanders is strongest among the youth. A striking 85% of Democrats under age 25 voted for Sanders in the Iowa caucuses, and he’s beating Hillary by a wide margin among Democrats under 45. The internet belongs to them. Meanwhile, Hillary’s message does not regularly spread through Twitter memes but resonates with older voters. It’s a perfect storm, in terms of virality, for a meme whose pattern is cool versus uncool.

But the pattern is also man versus woman. Could we therefore argue that this meme is sexist? We could, I guess, in the sense that to be a woman in society is to be the object of sexism. Here’s Amanda Hess:

[A]s Sady Doyle has chronicled for Slate, Hillary’s reputation as a pandering fake is informed by 20 years of being skewered as either “bitchy, crazy, dangerous” or “cold, robotic, calculating” by critics on both the left and right. If she seems to try too hard, it’s because she does have to work harder to succeed. Which brings us back to that nuclear critique of Bernie supporters: Some of them, sometimes, may just be a little bit sexist.

This is as close as we’ve gotten to the argument that it’s sexist to run against Hillary Clinton. Hess rightly points out that as a woman, Hillary has had to work harder to join political power groups and make people take her opinions seriously. When we laugh at her for being uncool, we laugh at the fact that a woman has to be a lot cooler than a man to fit in.

But that argument would apply to any criticism of Hillary. Her accent sounds funny when she tries to speak Spanish? That’s sexist, because a woman has to work harder than a man to gain access to secondary education in a foreign language. It’s fun and maybe instructive to come up with stuff like that, but it’s not a reliable way to identify sexism. The feminist critique is meaningful only insofar as it directs our attention. Its job is to diagnose problems.

Sexism is everywhere. But that doesn’t mean everything is sexist, and it would be a perversion of theorists from Wollstonecraft to Dworkin to say so. Perhaps the central tenet of the feminist critique is that sexism pervades. It’s in the Oval Office, but it’s also in the children’s section at Target. Men do sexism through conscious choices in their daily lives, but society also does sexism unthinkingly, in broad patterns. We repeat those patterns without thinking about them, and in this way, gender bias shapes our lives.

Sexism is all around us, like the air. But if we argue that everything is therefore sexist, feminism collapses the same way chemistry would collapse if we insisted everything was air. You can embrace the conceptual framework of feminism, even at its most radical, and still argue this meme has little to do with gender roles: 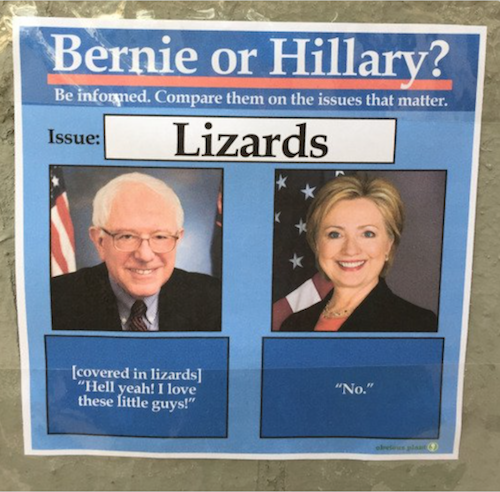 But do you really want to? Do you want to be the guy who proves feminists wrong? I sure don’t. I want to be the guy who makes feminists laugh and/or hire me. In this year’s nominating contest between a woman and a man who is not black, the feminist critique was bound to get thrown around, maybe even ill used. But it would be a bad consequence if that put us on guard against feminism—if our reflex argument when we heard something was sexist became no it isn’t! We would probably be right some of the time. But there are better things than being right.