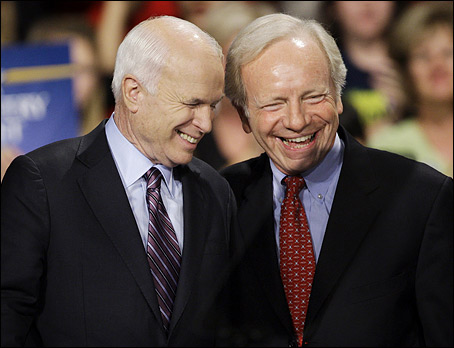 Senator Joe Lieberman (I-CT) is an independent in the truest sense of the word. He may be an elected representative of the American people, but that doesn’t mean he gives a damn what you think. You think he’s against George Bush just because he was on the opposite ticket in a Presidential election? Bam!—he votes to invade Iraq. You think you can keep him out of the Senate by voting for the other guy, who didn’t want to invade Iraq, in the Democratic primary? Bam!—he runs as an independent. You think the $1.98 million in campaign contributions he’s received from securities and investment firms since 2005 make him a darling of the financial industry? Girl, Joe Lieberman can’t be tied down to one lobby. Even though the insurance, health and pharmaceutical industries have only given him a million dollars in the last four years, he’s still declared himself willing to filibuster any health care bill that includes a public option. Joe Lieberman is the Senator from the great state of Fuck You, and when Harry Reid moves for cloture on whatever Keep America Strong and Healthy Flag-Lovers Bill he comes up with, Lieberman is going to stand up, look straight into the C-SPAN camera, and spend the next 36 hours calmly describing exactly which blindingly white and quivering part of his body the American people can bite.

That’s what he said on Tuesday, at least. “I told Senator Reid that I’m strongly inclined…to vote to proceed to the health care debate, even though I don’t support the bill that he’s bringing together, because it’s important that we start the debate on health care reform because I want to vote for health care reform this year,” Lieberman told reporters. “But I also told him that if the bill remains what it is now, I will not be able to support a cloture motion before final passage. Therefore I will try to stop the passage of the bill.” Quoting Joe Lieberman verbatim is disrespectful in roughly the same way as running up and snapping a picture of Jack Nicholson at the beach, but he’s basically saying that A) he won’t filibuster the motion to debate the bill, since B) it’s important that we pass health care reform this year, even though C) he plans to filibuster the vote on health care reform if it contains a public option, because, as he may have mentioned before D) fuck you.

Such logic may seem contradictory to you, but Joe Lieberman is just warming up. His objection to the public option is that it will cost a lot of money and therefore place an unfair burden on taxpayers, even though a few analysts say it will and a lot say it won’t. As currently written, Reid’s public option would require that the program be premium-financed, and specifically prohibit it from drawing on federal funds, but whatever. “All the history we have of health entitlement programs, including the two big ones that I dearly support, Medicare and Medicaid,*” 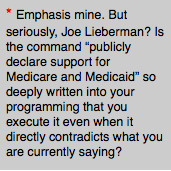 The difference may not be immediately obvious to you, but that’s because you haven’t spent 20 years in the Senate. Medicare is for old people, and old people vote. Public health insurance is for poor people, and even if they do manage to get the morning off from Wal-Mart to go to their local school and pull a lever, they damn sure ain’t going to give Joe Lieberman a million dollars. This public option thing could turn out to be political poison, just like the anti-war thing in 2003, or the continuing-to-be-a-Democrat-in-Connecticut thing in 2006. Joe Lieberman’s a survivor, baby. He’s not in the Democratic Party or the Republican Party—he’s in the Donner Party, and sometimes that means that if you want to make it through the winter, you’re going to have to eat a few sick people.