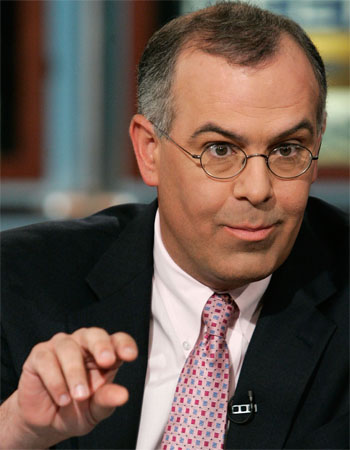 Seriously, does anybody want it? I'm going to eat it if nobody wants it. Michelle? You've had two already. Okay, we'll cut it in half.

Don’t get me wrong: I like David Brooks as much as the next guy. I realize I sound like I’m about to tell a David Brooks-ist joke—and if my grandpa asks you how you keep David Brooks out of your watermelon patch, just don’t respond—but I really do think that he provides sober, interesting analysis on a fairly consistent basis, provided that basis does not occur during campaign season, when he becomes insane. Generally, though, he’s a reasonable man. He employs logic and persuasive rhetoric in his columns, as if he were addressing people who did not necessarily agree with him before they started reading, which makes him something of a rarity among commentators on the right. As a result, his lucidity affords a valuable insight into the reasoning behind contemporary conservative thinking—a reasoning that is often obscured in the provocative (read: insane) rhetoric of a Beck, a Limbaugh or a Malkin.

Still, just because it’s valuable insight doesn’t mean it won’t be sad. Brooks’s column in today’s New York Times, in which he criticizes the Obama administration’s decision to limit executive compensation at banks and investment firms that received federal bailout money, exposes the nihilism at the heart of contemporary conservatism. Worse yet, it contradicts what he was saying one year ago at this time.

Brooks’s essential contention is that people are excessively confident in their own problem-solving abilities. After a series of fun, unsourced statistics about how, for example, 90% of drivers consider themselves above-average behind the wheel—David Brooks be reading Feakonomics—he turns to his real subject: the hubris of the financial industry circa 2007, and the coequal hubris of the federal government that now seeks to regulate it. “Over the past year, the bonfire of overconfidence has shifted to Washington,” he writes. “Since the masters of finance have been exposed as idiots, the masters of government have concluded…that they must be really smart.”

I’m not sure that was exactly the logic of the Treasury Department, who presumably we’re not sitting around waiting to ascend from their place as the second cleverest group of people on earth. The federal government launched TARP and its associated eleventy-gajillion dollars worth of bailouts in order to rescue an American economy that broke its neck trying to fellate itself, not to prove how smart they are. Still, Brooks’s shaky connection can be treated as a rhetorical flourish rather than as straight reasoning. His essential contention—that the government shouldn’t be regulating executive compensation at rescued banks, to do so is an ambitious attempt at financial and social engineering, and such ambitions on the part of government are necessarily doomed to failure—is much less tenuous and much more depressing.

It’s not that Brooks believes the proposed compensation policy is particularly flawed; it’s that any such policy is doomed to failure. “Again, the issue is not whether government acts, but whether it acts with an awareness of the limits of its knowledge.” Certainly, we don’t want a government that believes it’s knowledge is total and perfectly applicable. Brooks, though, seems to think that knowledge itself—along with regulation and any other attempt to improve the condition of the country through the passage of laws—is a lost cause.

His reasoning—knowledge is limited, therefore people screw up, therefore let’s not try to do anything—has become the core of contemporary conservatism. The simmering resentment of the Republican Party toward the Obama administration has boiled down to an essential opposition to the federal government. It’s a miracle they haven’t tried to disband the post office. In the mind of the American conservative, the same people who run the country so wisely in the context of free markets and rational self-interest become slavering incompetents when they try to see to the interests of others. It’s a selfish ideology, and in its rapidly solidifying tenet that government is the worst solution to any problem, it’s dangerously nihilistic.

It’s also politically self-serving. The same David Brooks who today warns that “in moments of government overconfidence, officials come to see society not as a dynamic and complex organism, but as a machine, which can be rebuilt,” was, in September of 2008, excoriating the “nihilists” who voted against the original bailout. “They still think the biggest threat comes from socialism and Walter Mondale liberalism. They seem not to have noticed how global capital flows have transformed our political economy.” When the Bush administration seeks to engineer an economic recovery, it’s necessary. When Obama does it, it’s hubris. I wish I could point to a substantive difference between the two Presidents’ policies, but it appears that Brooks primarily objects to the color of the man’s tie.

Brooks’s about-face, and the larger nihilism that has come to dominate American conservatism, seems to be the natural consequence of life as an opposition party. The GOP is manifestly out of ideas. Its fundamental tenet—that the free market is a universal solution—happens to have been demonstrably refuted by the country’s biggest problem. Fortunately for them, the Republican Party is in sufficient minority in Washington that they don’t have to govern. All they really feel obligated to do is oppose Barack Obama at every turn, and their increasing antipathy toward government itself fits nicely with that role.

What happens, though, when we actually need American conservatives to do stuff? To have ideas and engage in informed debate about how best to govern, rather than whether it’s worth it to even try? In warning against the potential overreach of federal power under the Obama administration, Brooks inadvertently hits the clearest note of his column: “The Democrats trust themselves to set private-sector salaries and use extralegal means to go after malefactors, but would they trust a future Dick Cheney?” With any luck and a strict wooden-stake requirement in the county morgues, there won’t be another Dick Cheney. But what happens when the people who believe government doesn’t work take control of it again? Brooks predicts failure, and in this case his prophecy, and that of American conservatism in general, might be self-fulfilling.