If you want your name to live forever in politics, come up with a reason why helping rich people is good for everybody. That’s what Arthur Laffer did in 1974, when he drew his famous curve on a napkin. The  Laffer Curve illustrates the theory that lowering tax rates can sometimes increase overall tax revenues by stimulating economic growth. This argument makes sense, as far as it goes, but it doesn’t tell us much. To many people, though, the Laffer Curve means that cutting taxes raises revenue. That’s the argument Treasury Secretary Paul Mnuchin made this week to justify President Trump’s1 plan to dramatically reduce corporate taxes. Won’t lowering taxes add to the deficit? Nah. “The tax plan will pay for itself with economic growth,” Mnuchin said. Well then. That sounds fortuitous.

Blithe presumptions like Mnuchin’s give the Laffer Curve a bad rap, but it’s theoretically sound. It’s also not Laffer’s idea; versions of the theory appear among economic writings as early as the 16th century. Laffer’s genius was to articulate it simply and clearly. He starts with the assumption that there are two tax rates where no revenue comes in: 0% taxation and 100% taxation. There are also rates between those two extremes where revenue does come in. It follows that there must be some rate where revenue reaches a maximum—a highest point on the curve, after it rises from zero but before it drops back down. Here is Laffer and his famous curve, courtesy of the Associated Press: 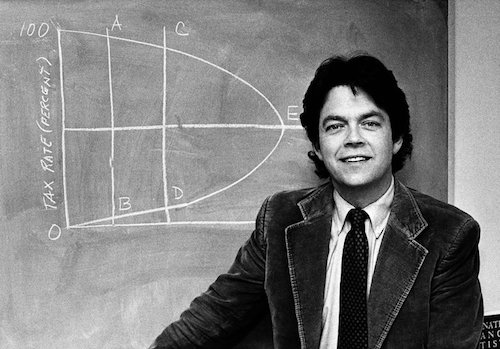 Note that a Laffer Curve based on real data would not look like that. The point of maximum revenue is probably not right in the middle. The curve probably isn’t symmetrical. Given the vagaries of a postindustrial economy, it’s probably not even a regular curve. I bet the relationship between taxation and economic growth is not just a second-degree function like the parabola pictured above. The problem with Laffer’s curve is that it starts from the rigorous reasoning of the two zeroes that must have some highest point between, and then fills in all the remaining unknowns with pure conjecture.

The most glaring assumption people make when they cite the Laffer Curve as evidence is that taxes and growth offset each other evenly. Why should that be? Does cutting taxes from 50% to 25% make the taxable economy exactly twice as big, thereby preserving revenue? It seems unlikely that tax rate and growth operate like a numerator and denominator, consistently balancing out no matter how we tweak them. There’s probably a sweet spot. And while the Laffer Curve tells us that sweet spot exists, it says nothing about where it should be. Why should revenue maximize at 15% and not 70%, where a number of left-leaning economists suspect it is?

It may shock you to learn that many right-leaning economists think the ideal tax rate is actually a lot lower. The problem with the Laffer Curve is that it brings in way too many variables and doesn’t supply enough equations to plot them. Where the revenue-maximizing rate lies is pure conjecture. But the notion of the curve as graph based on data and a formula lends credence to the theories people use to fill it in. It’s a theory that provides evidence for itself, a snake vomiting up its own tail.

Nobody studies the Laffer Curve, runs the numbers, and concludes that lowering taxes will increase revenue. They want to lower taxes, and they turn to the curve for evidence that it will work. Its robustness as a theory is inextricably tied to its usefulness as an argument for doing what rich people want already. In this way, Laffer’s famous napkin is like the tablets Moses brought down from Mt. Sinai: a symbol for the authority behind a set of values. It’s the thing that says you can be for lower taxes and a balanced budget at the same time, because lowering taxes doesn’t actually lower revenues. It creates growth! You can see it right here, in the sketch some dude drew to illustrate a thought experiment.

The amazing thing about the Laffer Curve is that it’s just the Real Value Theorem. That’s the extent of its rigorous claims; once you get past that part, everything else is speculation. The fact that this modest insight has become the basis for a whole theory of political economy is a testament to how useful it is. The real idea behind the Laffer Curve is that there’s no downside to cutting taxes. That’s why it’s stayed popular for so long, and that’s why it means so much to people, even as it says so little.