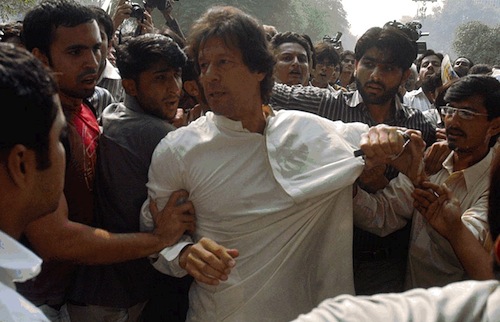 Those of us who attended the University of Iowa might remember the terrifyingly-named Campus Crusade for Christ, a Christian student group devoted largely to making t-shirts and organizing church retreats where, it can be presumed, absolutely no one got handjobs. In America, our campus religious groups are pretty harmless, and still we find them vaguely inappropriate. In Pakistan, their campus religious groups beat people with bicycle chains, and they are allowed to run the teacher’s union. That’s the news from this LA Times report on Islami Jamiat-e-Talaba, who slapped a male philosophy student at Punjab University for talking to a female student. After the philosophy department organized a protest, the IJT responded by attacking their dormitory in the middle of the night. Then nothing happened because, as the principal of Punjab university put it, the IJT runs “a parallel administration.”

Here’s a fun paragraph from the Times report that captures what sort of student group we’re talking about, here:

Fellow students and teachers regard them as Islamist vigilantes. In addition to trying to separate the sexes, they order shopkeepers not to sell Coca-Cola or Pepsi because they are American brands. When they overhear a cluster of fellow students debating topics, from capitalism to religion, they demand that the discussion stop and threaten violence if it continues.

University officials say that government leaders in Punjab, the country’s wealthiest and most populous province, have allowed the IJT to flourish rather than jeopardize their political alliances with hard-line clerics at the helm of religious parties. Even when students, teachers or university administrators seek criminal charges against IJT members, the police rarely respond.

Here, then, is the absurd consequence of allowing religion into politics: it allows religion into government, which in turn allows religion to beat the hell out of the philosophy department. Again, this is Pakistan, where business newspapers uncritically publish reports that the US has established micro-states within the country in order to launch terrorist attacks. With all due respect for the rich history of its culture and the energetic enterprise that lights the way to its future, Pakistan is dumb. It’s worth considering why it’s dumb, though, and it might have something to do with the problem of college students not being able to debate ideas without having some other college student slap them in the face.

Every society contains a group of people so convinced of the rightness of their own religion that they feel compelled to inflict that rightness on others. Every society also contains a group of politicians willing to pander to them. The question—and I think at our present moment in US history, it’s more than academically interesting—is how a society gets to be like Pakistan. As the Times observes, the IJT is only going to get more powerful as its growing number of student activists turn into a generation of adults. If you want to change a country, change its students. That principle works in both directions.