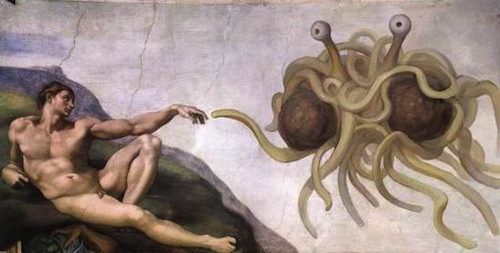 You must never touch him.

If you enjoy nuanced philosophical discussions occasionally interrupted by a smugly facile Stanley Fish, you probably already read the New York Times’s Stone blog. I’ve lost you already, haven’t I? How about this: on Sunday, the Times published an opinion piece that contained the sentence “the personal experiment of excluding all moral concepts and language from my thinking, feeling and actions has proved so workable and attractive, I am convinced that anyone who gives it a fair shot would likely find it to his liking.” That’s Joel Marks, writing about his transition from secular ethicist to amoralist and touching on several interesting problems in contemporary discourse. In addition to being the subject of the world’s shortest-range headshot, Marks proposes that faith in an objective morality is no more reasonable than faith in god. He also introduces a spate of unfounded assumptions along the way.

Marks’s is a sort of reverse conversion narrative. He started as a secular ethicist—someone who believes that morality exists independently of divine authority, a position articulated most famously in Plato’s Euthyphro. Socrates, perhaps devoting insufficient attention to his own impending capital trial, puts to Euthyphro a pointed inquiry: do the gods love something because it is pious, or is something pious because the gods love it? The questions poses two different reasons to behave morally: because a powerful god or gods want you to, or because it is simply*

the right thing to do.

Contemporary atheists—along with a bunch of contemporary theists—put their confidence in the second reason. For the genuinely moral person, by which I mean the moral person who thinks as I do, there is something unpalatable about the idea that stealing stuff is only bad because it pisses off god. A satisfyingly moral person does right even when he knows no one is watching, and a satisfying moral system derives its authority from something more than the threat of punishment. Right and wrong is still right and wrong, regardless of whether you have a god to administer it.

Except where does right and wrong abide? If you don’t believe in god or weirdo animism or other supernatural arbiters, then how can the quality of morality be an inherent feature of the universe? Marks analogizes this problem to the beauty a person sees in a sunset:

In other words, could I believe that, say, the wrongness of a lie was any more intrinsic to an intentionally deceptive utterance than beauty was to a sunset or wonderfulness to the universe? Does it not make far more sense to suppose that all of these phenomena arise in my breast, that they are the responses of a particular sensibility to otherwise valueless events and entities?

The sunset is not itself beautiful; the person sees beauty in the sunset, just as another person sees beauty in Kim Kardashian or a nice coffee maker. Although he does not name it as such, Marks is describing the problem of the absurd. In The Myth of Sisyphus, Camus proposes that the universe is not sentient and therefore indifferent to human concerns. Ideas like fairness, irony, beauty and justice are important to us, but they also come from us exclusively; the universe is concerned with obeying the laws of thermodynamics and doesn’t care how many kittens it has to suffocate to get there. That’s why the universe is such a famously irritating place. The sensation of being concerned about what is fair and good and finding the universe disappointingly indifferent to same is what Camus calls the absurd.

It is also where Marks and Camus diverge. Marks argues that, because morality is not an independent feature of the universe but an individual choice/response, it is so varied and subjective as to be pretty much meaningless:

So someone else might respond completely differently from me, such that for him or her, the lie was permissible, the sunset banal, the universe nothing but atoms and the void. Yet that prospect was so alien to my conception of morality that it was tantamount to there being no morality at all. For essential to morality is that its norms apply with equal legitimacy to everyone; moral relativism, it has always seemed to me, is an oxymoron. Hence I saw no escape from moral nihilism.

It’s a compelling argument, but it assumes a premise that is only necessary in the context of Marks’s own conversion narrative. He began by thinking that morality had value independent of religion—that it inhered in the universe. Having decided that morality does not inhere in the universe, he concludes that it is an empty concept. Yet Marks’s original claim was not that morality had independent value because it wasn’t subject to godly preference; morality was not subject to godly preference because it had independent value. The loss of an independent existence only undermines the validity of morality if you made it a necessary premise in the first place.

For Camus, the idea that morality is something human beings bring to the universe and not the other way around makes it more important, not less. If we are the only sources of moral reasoning—along with notions of order, beauty, progress, et cetera—then our obligation to behave morally is only increased. If you’re a kid, it’s important that you do the dishes because your mom will get mad if you don’t. If you’re an adult living alone, it’s important that you do the dishes because no one else will. Camus is a moralist precisely because the universe is absurd, not in spite of it. Perhaps the word for such motivated behavior is not morality but integrity. Perhaps the distinction between the two can be collapsed, but that makes neither unimportant.