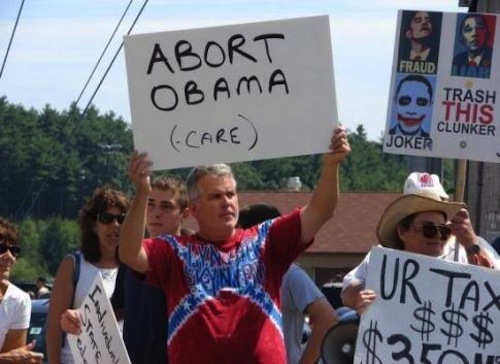 His support for abortion makes him an extreme outlier within the Tea Party, but his Skynrd shirt puts him right back in the middle.

Perhaps the most frustrating aspect of the Tea Party is its members’ claims about who they are. Tea Party groups continue to identify as grassroots, non-partisan coalitions of citizens from every walk of life, when we all know that they’re white racist Republicans or, sometimes, white racist libertarians. By “know,” here, I mean “assume in a way that makes us feel guilty about our own closemindedness.” There is no quantitative proof that Tea Partiers are more bigoted, GOP-affiliated and prone to sunburn than the average American, after all. For that you’d need some kind of comprehensive, long-term survey, and such a thing would be too good to—oh, you shouldn’t have, David Campbell and Robert Putnam of Notre Dame. And just in time for my birthday, too.

Putnam and Campbell conducted two sets of interviews with 3,000 Americans, the first in 2006 and the second this year. If you’ll remember, the Tea Party sprang fully formed from the patriotic spirit of ordinary folks like you and me on January 15th, 2009, which means that P&C’s survey provides handy before and after pictures of the group’s members. For example, future Tea Party supporters were overwhelmingly Republican in 2006, and they were more likely to have participated in politics before. I would file that data under Blandly Unsurprising, as distinguished from the rest of the survey, which goes under Ruefully Unsurprising.

Here’s a fun quote: “[Tea Party members] are overwhelmingly white, but even compared to other white Republicans, they had a low regard for immigrants and blacks long before Barack Obama was president, and they still do.” First of all, I think the phrase “even compared to other white Republicans” should go in every sentence describing racism, the way they used to put pencils in photos of tropical insects. Second, this factoid provides a much-needed statistical undergird to the unsettling confluence of pictures of the first black President in clown white, the phrase “take our country back,” and middle-aged white people recreating the March on Washington. It’s like when one encounters the German word for some heretofore unnamed phenomenon: one feels the relief of vague sensation snapping into the concrete.

Such is the vindication at learning that “next to being a Republican, the strongest predictor of being a Tea Party supporter today was a desire, back in 2006, to see religion play a prominent role in politics.” Despite their relentless fetishization of same, the Constitution seems more like a mascot for the Tea Party than a guiding document. Chief evidence for that proposition was the tendency of Tea Party members to prioritize the Second Amendment over the First, and the inability of the head of the congressional Tea Party Caucus to go ten minutes without mentioning Jesus. That stuff was convincing, but allowing oneself to be convinced by it put the intellectually honest person in a tough position. One wants not to take one’s gut feelings as proof. Now, though, we have this beautiful statistic.

So the reification of our instinctive prejudices about the Tea Party into demographic quanta is great, and I personally interpret it as proof that I should be more willing to advance my opinions without concrete evidence. I’m only partly joking, here. The most satisfying datum from Putnam and Campbell’s survey may be the news that, among those polled, the Tea Party is less popular than any of the other 23 groups asked about—less popular than the Democratic and Republican parties, and “even less popular than much maligned groups like ‘atheists’ and ‘Muslims.'” I think I speak for everyone when I say wait, atheists? I also say that this is another feeling we had all along, even when cable news and political strategists believed that the Tea Party was the most powerful movement in American politics since Reagan’s big tent.

It wasn’t, and it ain’t. Perhaps the greatest lesson to be taken from Putnam and Campbell’s survey is that the American electorate is smarter than we think, even when it appears relentlessly dumb. That applies to our own perceptions about what looks and walks like a duck, and it applies to the broader country. The Tea Party is a reminder of the stupidity of populism and the paranoid style in American politics. It also reminds us of the limitations of both. As usual in contemporary governance, the most common mistake is to underestimate the wisdom of the American people. Lord knows we make it around here.