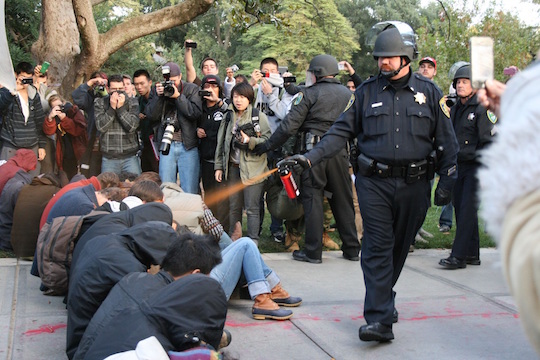 We don’t know how many Americans are killed by police officers each year. The FBI asks for voluntary annual reports of so-called fatal encounters from local police departments, but they don’t comply. Even those departments that submit reports don’t include circumstantial information like the races and ages of those killed. No less an investigative authority than the New York Times was forced to admit that “no precise figures exist for the number of people killed by the police in the United States,” which is kind of astounding when you consider that the FBI does have records of every email and text message. But we do know this:

Research by Philip M. Stinson, a criminologist at Bowling Green State University, reports that 41 officers were charged with either murder or manslaughter in shootings while on duty over a seven-year period ending in 2011. Over that same period, police departments reported 2,600 justifiable homicides to the FBI.

Even if we ignore the consensus that police killings are significantly underreported, that’s a charge rate of 1.6%. And that’s not to say that 1.6% of cops who kill people on duty are convicted of crimes. Only 1.6% are even charged.

Compare this rate to the national grand jury indictment rate of 99.993%. Consider also that most on-duty killings by police don’t involve grand juries at all, either because they were obviously justified or because prosecutors and other municipal authorities agreed they were. But even if we ignore underreporting of fatal encounters by local departments and institutional bias against investigating police officers, a cop who kills someone on duty still enjoys a 98.4% chance of getting away with it.

That’s partly because police work so closely with the local prosecutors who run grand juries. Although most grand juries return decisions in less than a day and don’t hear from the accused, juries in police killings often last weeks and include officer testimony. In the grand jury inquest into officer Darren Wilson’s killing of Michael Brown, St. Louis County prosecutor Robert McCulloch pointed out inconsistencies in testimony from his own witnesses and invited Wilson to present his version of what happened. The Times believes that most grand juries against police officers proceed similarly.

Under normal circumstances, when prosecutors are actively pursuing charges, this system makes sense. But the extraordinarily low charge rate for police officers in fatal encounters suggests that the grand jury system can also work as a method of arbitrary acquittal. Cops who kill don’t have to submit to the same justice system as everybody else. Instead, they get secret trials where only their side is heard—a kind of perversely forgiving kangaroo court.

So the rhetorical question at the top of today’s can be argued on a disturbingly literal level. In light of the recent decision by a grand jury in the killing of Eric Garner—where continuous video showed Daniel Pantaleo violating NYPD regulations in the process of killing the unarmed, nonviolent Garner while five other officers backed him up—it’s reasonable to ask whether there are any circumstance under which a cop couldn’t get away with murder.

At least 98% of the time in the United States, a badge is a license to kill. From a purely statistical standpoint, any beat cop can kill 60 people before he even has to hire a lawyer.1 My question to you, America, is how does this square with our idea of ourselves?

The United States is supposed to be the country where citizens have more power than their government. It is not hyperbole to say that our nation was founded on opposing this kind of special treatment for cops and other instruments of state power. In 1774, revolutionary spirit in the colonies coalesced against the Administration of Justice Act, which allowed British officers charged with crimes in the course of enforcing the law in America to face trial in Great Britain, where juries were friendlier.

Is there much difference between shipping a colonial customs officer who killed a sailors in Massachusetts back to London for trial and letting a cop who shot a black kid in Ferguson face a secret jury instructed by his coworker? Maybe the difference is that we still think of the American government as our own.