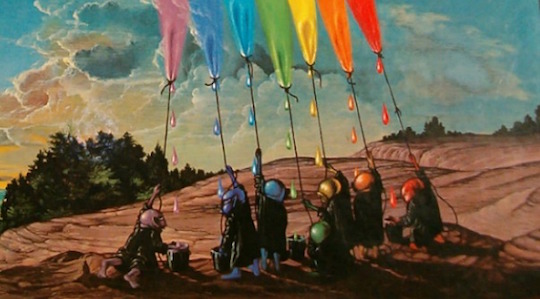 Yesterday, North Korea may or may not have successfully tested a nuclear bomb. Pyongyang’s official news agency announced that its test of a miniature hydrogen bomb had been a “perfect success” that took the country’s “nuclear might to the next level,” but the same agency also maintains that Kim Il Sung once rode a unicorn. North Korea has been locked in a truth-telling contest with the rest of the world for several decades now. Still, the 5.1-Richter earthquake near a suspected nuclear test site suggests that the secretive dictatorship exploded something yesterday, and that’s unsettling. Whatever North Korea is up to, it seems to have taken another step toward ranged nuclear weapons. Speaking to CNN this morning, Senator Steve Daines (R-MT) put the blame for this development squarely where it belongs: President Obama. Video after the jump.

I’ve been listening to Daines’s rhetoric for a few years now, and he is remarkably consistent. For example, he never refers to the president’s policies; it’s always his “failed policies.” But his signature move is to demand an alternative to those policies—or any idea he disagrees with—without ever putting forth an idea of his own. For example:

“As we look at the failed policies of the Obama administration, I think what we’re seeing is the world’s response to the weakness that is projected by our current president. Our enemies no longer fear us. Our allies no longer trust us…There’s a lot of parallels between what’s going on in North Korea and what’s going on in Iran today.”

Note that Daines identifies a problem using established terms from conservative talking points—failed policies, projecting weakness, our enemies no longer fear us—but avoids suggesting any possible solution to that problem. By using phrases like “no longer,” he implies a past when these problems didn’t exist. In this way, he suggests something is wrong that used to be right, but avoids saying how we might fix it or even what a fixed situation would look like.

Were Daines to put forth a plan to strike fear in the hearts of our enemies, he might make himself vulnerable to criticism. Should we declare war on North Korea and/or Iran? Should we disband the Atomic Energy Commission for which he expresses such disdain? There are no easy solutions to this problem, which is why the senator limits himself to demanding them, not suggesting any.

This communications strategy has served him since at least 2012, when “real solutions” became the informal slogan of his senatorial campaign. When addressing the policy proposals of his opponents or Democrats in Washington, he never offered alternatives. He consistently demanded “real solutions” instead—an ingeniously vague criticism that encouraged voters to compare the concrete policies at hand to their idea of how good a better solution might be. Here he is criticizing the debt limit deal on the Senate floor in October:

Since joining the Senate, Daines has sponsored 17 bills, none of which has become law. He has cosponsored 144 bills; one passed. In addition to railing against how long it takes to count to a trillion, this address lambasts the budget deal for not enacting “common-sense solutions” to the national debt and “fail[ing] to provide a more secure future for the next generation of Montanans.” His central tactic is to make the perfect the vocal enemy of the good.

It’s not fair to evaluate Daines’s entire rhetorical strategy based on one three-minute speech to the Senate, but this clip captures his scrupulous aversion to specific ideas. Daines is a pure critic. He rejects any given policy not on its particular details but because it is particular at all. No concrete solution is as good as the “real solutions” he craves, because the actual is necessarily inferior to the whole sweep of better ideas that might be out there, if only we could find them. The senator from Montana embodies the last seven years of oppositional Republican politics—a politics whose central message is “why aren’t things better than this?”

Here’s a fun question: What would Daines do about North Korea if he were allowed to make laws in the US Senate? Would he bomb Iran? Would he project strength around the globe after 15 years of weakness-projecting war? Perhaps he would finally stumble across one of those real solutions he’s been looking for so long. But would he like it?