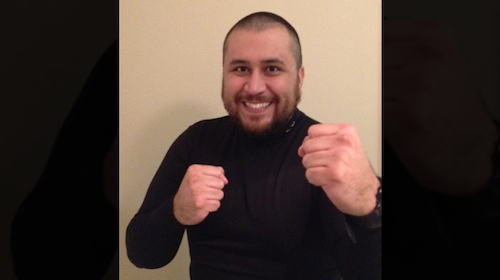 Someone should warn DMX that his stated plan of “breaking every rule in boxing to make sure I fuck him up right” can jeopardize the sanctioning of this bout. Probably that someone should be promoter of celebrity boxing Damon Feldman, who incidentally would like to sort of apologize for announcing the bout the night before Trayvon Martin’s birthday. He’s not responsible for any of this. Quote:

The thing is, it was thrown into my hands, and I basically just take it as it comes. I wasn’t looking basically for anything other than putting Celebrity Boxing back out there. My events are always surrounded by controversy. That’s what Celebrity Boxing is about. I’m in business. This is all just business for me. I don’t know Zimmerman other than talking to him seven times.

So Feldman is not endorsing Zimmerman in any way, nor does he want to hurt anybody’s feelings. He recognizes that the whole thing is controversial, but what can he do? He could make money from it, so basically his hands are tied.

The rest of us, myself included, are similarly powerless against this whole story. Once the idea of Zimmerman boxing DMX—or any frightening black person for that matter, including The Game but not Kanye West—is out there, we pretty much have to think about it and eventually watch. It does not matter that the bout is contagiously undignified and probably contrary to the expressed principles of an ostensibly just society.

Unlike, say, the Rodney King verdict, there was no rioting in the streets after the Zimmerman acquittal. That’s odd, because in many ways the Zimmerman affair was an exaggerated version of the King incident: Martin was killed instead of badly injured, Zimmerman was a self-nominated vigilante instead of a cop, and he shot his victim instead of beating him. Ask a riot-predicting computer, and it will tell you that America should have gone completely nanners.

We didn’t, though, for reasons that we probably never will understand. The state and the citizenry having failed us, we must now turn to the free market. We may not get to see Zimmerman jailed or burned in effigy, but we can at least see him socked in the kisser on the internet. The only problem with this kind of justice is that he profits from it.

Sure, he’s giving his purse to charity, but I’m not certain Zimmerman is doing this out of love for his fellow man. He says he’s doing it to get back in shape, but there are easier ways to do that without simulcasting it on the internet or having to fight DMX. I daresay Zimmerman is participating in this celebrity boxing match for the obvious reason: to aggrandize himself.

Nobody wants to watch DMX feint the left and smash Zimmerman behind the ear with a right cross more than I do. But we have to consider that seeing Zimmerman in this one satisfying moment will necessitate seeing him in several other, non-smash moments in the future. It will keep him in the public eye, which is the last thing we want for at least two reasons: it will please him, and it will force us to keep thinking about how badly we screwed up.

Maybe that’s the punishment we deserve. It feels like a half-assed substitute for justice to put him in a celebrity boxing match, but we should confront the fact that doing so makes him a celebrity. Perhaps that horse has already left the barn. But we still have a chance to put him out to pasture and let him live with his horse-guilt. That won’t happen if we ride him around the square, even if we’re whipping him the whole way.