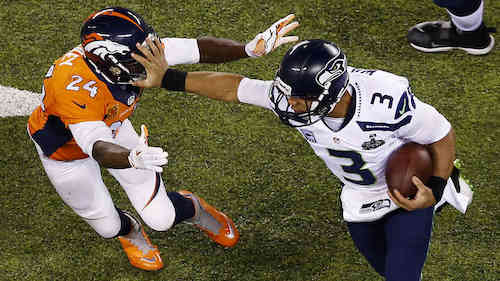 The Seahawks ram it through the Broncos’ tight little defense.

A. Ron Galbraith sent me this fascinating analysis of traffic on Pornhub.com during and after the Super Bowl, which suggests that Denver fans continued to have a hard time when the game was over. Get ready for more of that kind of talk. During the Super Bowl, internet traffic from Colorado and Washington to the web’s most popular pornographic video site deviated from average by -51% and -61%, respectively. After the game, Seattle traffic remained 17% below average, but Denver traffic was 11% higher than usual. It appears that Broncos fans drowned their sorrows in Kleenex, which gets weirder the longer you think about it.

Editor’s note: change “number-hungry statisticians” to “number-craving statisticians.” Also, the men and women who find that the Super Bowl can’t be matched by anything else in the world are doing it wrong.

Surely, watching television has ranked high on the list of things to do when you don’t know what else to do for a long time. Fifteen years ago, America might have been equally bored after the Super Bowl and had little choice but to watch Becker. Now we have high-speed streaming video pornography, and for a substantial portion of the Super Bowl-viewing audience, that’s a better waste of time than TV.