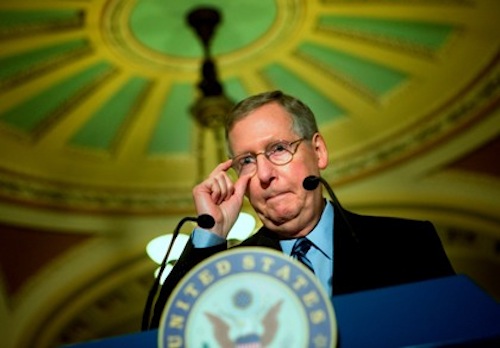 Though they’ve backed off from the assertion that S 3721 will lead to future bailouts—that Bigfoot story now survives only in Tea Party newsletters—Senate Republicans are still saying that the bill needs to spend more time in committee. Bipartisan compromise is only days away, says Richard Shelby (R–AL, net worth $7.3 million,) and it is in the spirit of compromise that he guarantees a unified, 41-Republican stand against today’s movement for cloture. The Republican Party is going to filibuster financial reform in front of god and C-SPAN, and hopefully millions of unemployed Americans will flip on the TV just in time to see Mitch McConnell reading out of the phone book in valiant defense of Goldman Sachs. The Senate is going to do nothing today, kids, and it’s going to do nothing on the GOP’s political dime. While the party of Lincoln self-immolates, having once again disastrously overestimated the country’s percentage of monocle-wearing plutocrats, let’s take a moment for some heavy reading. Everybody loves reading, right? Guys? Football metaphor?

First, we should probably get some idea of what’s in the actual bill, along with the rest of what’s in there. The big-ticket item—and the source of McConnell’s incessant*

bailout accusations—is a $50 billion fund, financed through taxes on banks, that will provide for the “orderly liquidation” of institutions previously deemed too big to fail. When a senior citizen outside the post office says through his megaphone that the financial reform bill will require bailouts, this is what he’s talking about. The bill also creates a federal commission to assess the stability of large financial institutions, provides for regulation of the derivatives market for the first time in history(!), and may or may not force traditional banks to spin off their hedge funds and other high-risk investments into separate entities. Basically, this bill is to the 2008 collapse what taking your shoes off in airport security is to Richard Reid. It aims to curtail the worst abuses of the last decade, in the hopes of avoiding the kind of massive economic clusterfuck that threatens to drag on through this one.

And why do we need such regulation? Consider, for starters, that in the last 25 years the financial industry has grown to 41% of the domestic economy. That shocking statistic—it’s up from 16% in 1986—comes from Simon Johnson’s long and awesome recent article in The Atlantic. A former IMF officer, Johnson argues that the United States is currently in the grips of a financial oligarchy of the sort normally seen in emerging markets—places like Indonesia and post-Soviet Russia, where a small group of financiers and captains of industry become so powerful that they can reasonably expect their national government to cover their personal investments. Sound familiar? The news that Citigroup—an institution of such profound importance in such dire need that the federal government had to up and give them several billion dollars 18 months ago—made $4.4 billion last quarter should give you some idea of how real the possibility of failure actually is for these bold entrepreneurs. We’re playing a rigged game. For the men and women who own Citigroup—the people who take the profits when the company succeeds, and use them to buy apartments in Manhattan and trips to Paris and historically significant art that the rest of us are not allowed to have—it’s heads I win, tails you lose. In 2008, they learned that there are consequences to their actions: if they make a bunch of mistakes and their company loses all its money, they’ll still be rich and powerful, but they’ll have to confront the vague distaste of the American people, at least for a while. Free enterprise isn’t free, after all.

We need financial reform because right now we’re paying the costs of a centralized economy without enjoying any of the benefits. McConnell’s old threat that reform will lead to bailouts seems odd, considering that there’s already been a bailout. We know that when the chips are down, our federal government will push as many chips across the table as are needed to get the financial industry winning again. It happened already. As Johnson argues, we need to stop doing that if the game is to continue. In the meantime, all Chris Dodd wants to do is make a few rules about which hands the banks can play.

It’s not enough, but it’s a start. The legislative package that will almost come under consideration today has been called the biggest financial reform since the Great Depression. That seems fitting, since it comes in the wake of the biggest financial collapse since then, as well. In 1933, Roosevelt stood up to the American plutocracy and was called a traitor to his class. There may not be a Roosevelt in today’s Senate; if there is, we don’t know where he’s seated. In a couple of hours, though, members of the Republican Party will stand up, lodge their objections, and at least tell us where he isn’t.