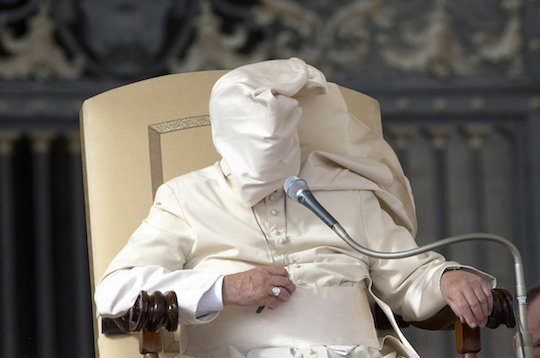 Wind blows the Pope’s mantle over his face in this photo by Alessandra Tarantino (AP).

Whenever the wind blows, I feel the universe is persecuting me. I know this feeling is irrational. Even if some malevolent force were deliberately causing gusts of wind whenever I set down my book or tried to lay out a blanket, the wind would still be blowing on everyone else, too. And even though the wind seems like a useless irritant—an unnecessary feature of Earth that serves only to piss me off—it’s probably important to change whether patterns and blow seeds around and stuff. Still, I cannot escape the sensation that this natural feature is an unfair irritant to me personally. Today is Friday, and the world’s basic mechanics feel like a conspiracy to thwart our plans. Won’t you shake your fist at a cloud with me?

The good news is that the wind blows for everyone, even the Pope. The Atlantic has published this genius photo essay titled The Pope vs. the Wind, made only more perfect by the simple, declarative captions. I particularly like #11: “A gust of wind takes Pope Francis’s skull cap upon his arrival at the airport in Quito, Ecuador, on July 5, 2015.” The vaguely jaded participle “upon his arrival” combines with Francis’s expression to suggest that he puts up with such shit all the time. If this were a Buzzfeed article, each picture would say “damn wind lol” or “you can’t handle the wind!” below it. Also the pictures would be of cats.

The bad news is that stupid listicles of cats are way more popular than ineffable photo essays, possibly because the vast majority of people do not experience interiority. I was 23 when my friend Ho theorized that most people don’t have anything more going on inside them than does a file cabinet. At the time, his claim scandalized me. Then I read this article from the Washington Post about the people Dylann Roof crashed with in the weeks before he shot a Bible study group. Stephanie McCrummen’s transcriptions of their conversations read like Raymond Carver, if Carver couldn’t feel:

“Oh Daisy,” she coos to the dog. She lights a cigarette and starts scrolling on her cellphone. “It’s hot,” she says after a while. “Jacob, you cold?”

They play video games. They look at their phones. They get high and lie down. They all seem to remember Roof talking about how he loved segregation and wanted to do something crazy, but none of them did anything. No one doing anything except when they do something awful is the leitmotif of this piece.

It’s important never to do anything, lest you become more like the world by interacting with it. For example, I agree with Donald Trump, now that he wants to end the carried-interest tax break. Right now, hedge fund managers and other financial services professionals have their incomes taxed as capital gains, giving them a much lower rate than other wage-earners. It’s supposed to be an incentive to invest, but I feel like incentives in the financial sector are already pretty sweet. Jeb Bush agrees with me. Grover Norquist does not. His editorial in USA Today reads like a litany.

Taxes are one of those issues where you can guess what you think about it by remembering which party you belong to.1 After Wednesday night’s terrifying Republican debate—in which medical doctors Rand Paul and Ben Carson implied that parents could responsibly opt out of vaccination schedules over autism concerns, and Trump shared an idiotic anecdote about a girl who got vaccinated and was later autistic—Jennifer Raff worries the issue will become politicized. Right now, Americans of both parties agree vaccines are safe and good. But, Raff writes:

If we start drawing party lines on top of the vaccine debate, people will start to use their party affiliation to define their position on vaccines. They won’t realize they’re doing it. They’ll honestly think they’re making decisions about vaccines based on the facts. But they’ll be judging those facts based on the community they belong to, the way we all do.

There should be a name for that phenomenon, and it should probably have something to do with NASCAR and/or lattes. Meanwhile, among other people who see clearly, Linda Greenhouse has questioned the apparently special treatment we give to religious objections compared to other moral philosophies. Judge Richard Leon has called it “regulatory favoritism”—a system that lets religious employers deny contraception coverage to their employees, but would not let the same people do so for other, non-religious reasons. Remember when religion was what we had instead of science, epidemiology, and existentialism? Me neither.