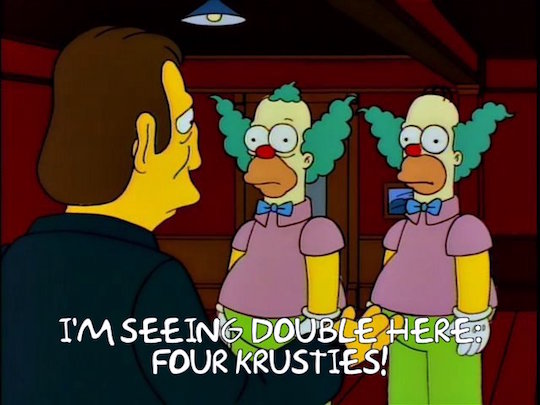 One of the best features of American politics used to be its reliability. I’m not saying it ran well, but at least you knew what the parts did. Democrats tried to increase social services and tax rich people to pay for them. Republicans tried to invade the Middle East and lower taxes to pay for it. The shouting pundits, flacks posing as reporters, vampire consultants and party hacks all shook out along recognizable strategic and political lines. Then 2016 happened. Today is Friday, and the old verities no longer apply. Won’t you try to tell the players without a scorecard with me?

The good news is that at least one Republican PAC and one Democratic PAC have come together in a spirit of cooperation. The bad news is they’re cooperating to fleece donors. Buzzfeed News—itself a novel combination of previously opposed entities—reports that Progressive Priorities PAC and Liberty Action Group share a treasurer, have nearly identical websites, and haven’t given any money to actual candidates. They have, however, spent hundreds of thousands on consultants and telemarketers. You thought lax campaign finance laws would allow rich donors to subvert democracy, but maybe it’s just a way for middlemen to rip off donors. That’s probably bad, even if it is bad in roughly the same way as the eastern front.

I’d call it a shocking perversion of democracy, but somebody already said that about the last ten Supreme Court decisions. Ditto “disgusting” and “terrible,” both of which now regularly appear in headlines about press conferences. Over at the New York Times, Frank Bruni wonders whether the hyperbole we’ve brought to political rhetoric over the last decade has left us ill-prepared to deal with a candidate who actually is terrible and disgusting, Donald Trump. He quotes Howard Wolfson, who worked on John Kerry’s campaign against George W. Bush:

I worked on the presidential campaign in 2004…And I’m quite confident I employed language that, in retrospect, was hyperbolic and inaccurate, language that cheapened my ability—our ability—to talk about this moment with accuracy and credibility.

Remember when Bush was a fascist for wanting to cut the estate tax, and Obama was a traitor for exchanging bows with the Japanese prime minister? Now that one major-party candidate loves Vladimir Putin and mass deportation, I’m starting to wish we had left a little headroom.

Trump is really bad, you guys. It’s critically important that he not become president, which is why it’s become morally wrong to report on anything bad Hillary Clinton might have done. In an editorial at the Intercept sure to sadden Krug-Man just as soon as his assistant finishes summarizing it, Glenn Greenwald worries that Clinton’s relationship with the media might be a little too good. At a moment when it seems likely she will become president, ignoring the potential problems of her administration is irresponsible. Quote:

But it would be journalistic malpractice of the highest order if the billions of dollars received by the Clintons — both personally and though their various entities — were not rigorously scrutinized and exposed in detail by reporters. That’s exactly what they ought to be doing. The fact that quid pro quos cannot be definitively proven does not remotely negate the urgency of this journalism.

Running against D. Trump may make you infallible in the voting booth, but it won’t do a thing for you in the Oval Office. Perhaps the pundits and reporters who have made it their jobs to help her win the election will switch back to hard-nosed journalism after she’s sworn in. Or perhaps, you know, not.

People can change, though. If you’re wondering just how much, read this surprisingly literate and shockingly generous defense of the Black Lives Matter movement by none other than Glenn Beck. He’s in the New York Times, which is like finding Bizarro Superman in the kitchen baking you a cake, and he’s describing BLM activists as “decent, hardworking, patriotic Americans.” Of course, he remains Glenn Beck, so even his calls for empathy are not without internal ironies:

Empathy is acknowledging someone else’s pain and anger while feeling for them as human beings —even, and maybe especially, when we don’t necessarily agree or understand them. Again, that’s different from empathizing with self-interested insiders and instigators. Just as I suggest a concerted effort at empathy, we must also stand together to confront the nefarious elements within our movements with equal fervor.

So he’s still whipping his audience into recriminations against imagined enemies, but at least he’s encouraging them to imagine with a little more nuance. Bravo.

Times change, and so do alignments. Yesterday’s foaming demagogue is today’s guest columnist in the Times. Also, yesterday’s activists are today’s well-paid coders. One such formerly ideological punk wrote to Amber A’Lee Frost, advice columnist for The Baffler, about whether his contempt for his coworker is reason enough to quit his job. Frost tells him to chill out, in the funny and remarkably charitable way that makes her column such a delight. You should probably be angry at everyone all the time. But if you do, you’ll suffer, and so many of us burnt out on suffering so young.