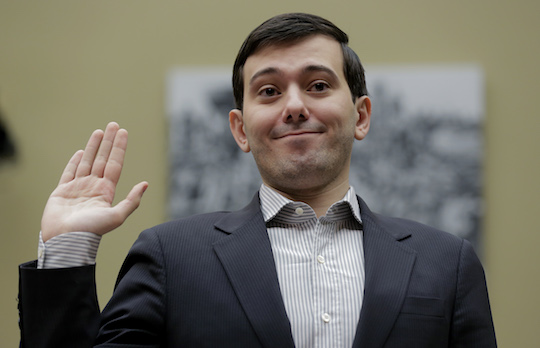 On September 11th, New York City watched in horror as a symbol of America’s intertwined economic and political power collapsed. Of course I refer to Hillary Clinton, who left a memorial ceremony at the World Trade Center yesterday and was subsequently diagnosed with dehydration and pneumonia. During the 90 minutes or so the Democratic nominee spent in the Flatiron apartment of her daughter, Chelsea Clinton, various onlookers gathered outside. One of them was Martin Shkreli, who livestreamed himself shouting “why are you so sick?” and “are you alive?” for about two hours. After Clinton left, Shkreli told the Daily News, “Chelsea Clinton does not live in that apartment. That apartment is an advanced medical facility.” He appeared to be lying.

Shkreli supports Donald Trump. He joins Rudolph Giuliani, Chris Christie and cab drivers who insist on taking the tunnel from LaGuardia to uptown Manhattan in keeping to the endorsement of their union, Amalgamated Shitbags of New York.1 But Shkreli is not the same kind of awful person as Giuliani or Christie. Already kind of a heartless authoritarian, Giuliani fully embraced fascism when he became mayor of 9/11. Already known for sucking up to famous people, Christie saw his chance to get on the winning team2. These men are despicable, but Shkreli is a different kind of monster.

Giuliani and Christie embraced Trump and became more themselves. Shkreli seems to have become a vocal Trump supporter after his self exploded. Before his company acquired Daraprim, Shkreli was little-known and rich. After his company raised the price of the antiparasitic medicine 5,000 percent, the BBC called him “the most hated man in America,” he was indicted for securities fraud, and he lost his job as CEO of his own company.

Shrkeli started rich and got famous instead. His notoriety almost certainly encouraged the SEC to investigate him, which in turn undermined the foundation of wealth that allowed him to become notorious in the first place. Yet rather than shrink from fame, he has embraced it. Even though becoming well known seems to be the root of his problems, Shkreli has seized on fame as what remains now that everything else has become unreliable. In this way, he has followed a path that is the opposite of Clinton’s—who started famous and got rich—but remarkably similar to Trump’s.

Here’s the $60 question: In the United States, is being known and hated move valuable than not being known at all? Shkreli seems to think so. Why else, after his fame ruined him, would he take such pains to preserve it? He bought a Wu Tang Clan album no one else can listen to, stonewalled a congressional hearing, and broadcast himself heckling a sick grandmother. Unless he is a very simple kind of narcissist, he seems to regard infamy as an asset.

And wasn’t it an asset for Trump? At the beginning of the Republican nominating contest, Trump was a joke. But he was a joke that even the most disconnected voters could understand, and his name recognition—buttressed by a continual string of clownish and/or offensive remarks—gave him a momentum he never lost. Everyone knew he was an asshole. But everyone knew him, and that—combined with a crucially alienated Republican electorate—turned out to be enough.

The Republican Party reached a critical mass of alienation that allowed them to nominate a neo-fascist maniac. Is it possible for the general American public to do the same thing? Again putting aside the possibility that Shkreli is just not acting rationally, the man is an analyst of markets. He is bullish on notoriety, even when it comes at the expense of decency and regard. He seems like a uniquely awful person, but maybe he is also an early speculator in an asshole boom.