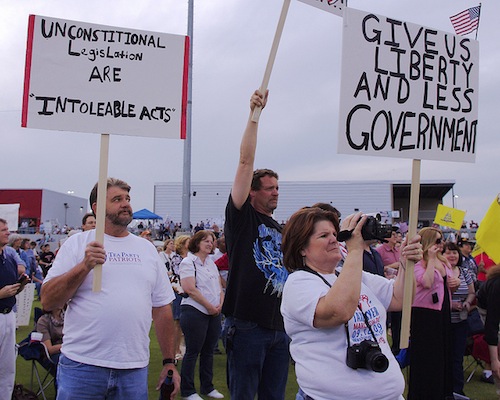 Now that the nation has been conveniently divided into Real Americans and everyone I know, and now that the former group has run proud and jiggling through the finish tape of electoral democracy, it’s time to face facts: elitism is cool again. Arch misanthropy is cool again. Sarcastically agreeing with the ignorant might even be cool again. It must be, because such people appear to be winning. What makes elitism uncool is that the elitist is—by definition if not in contemporary practice—winning. Making fun of the dumb and inexpert therefore looks an awful lot like gloating. There’s only one time when elitism is cool, and that’s when general stupidity attains such a supermajority that it overcomes its natural limitations and starts running society. Friends, now is one such historical moment. The retiring middle class and the sons of congressmen have wrested government from the insiders who run Washington, wrested discourse from the nebbishes who spend all day following the news, and wrested history from the eggheads who wasted years learning about it. They had TV already, so that’s pretty much everything. The people have spoken, and they have chosen themselves and/or whomever can convincingly mimic them as the wisest members of society. We humble minority will have to obey them, but we are allowed to make fun. Once you’re losing, that’s your prize. Won’t you snipe bitterly with me?

First, the good news: the Real Americans may yet find themselves destroyed by even realer Americans. Harvey Westmoreland, a Kentucky man who on first glance is so real that the edges of his body appear to be slightly out of focus until your realize that’s probably glandular, has been forced to eat his own beard as a result of a tractor deal gone wrong. Props to Smick for the link. According to Westmoreland, Troy Holt attacked him when Holt found out that the tractor for which he had just offered $250 cost Westmoreland $20. “One thing led to another, and before I knew it, there were knives and guns and everything just went haywire,” Westmoreland said, explaining that Holt and a friend cut off his beard and forced him to swallow it. Take that, tractor-owning elite! You’ll think twice before accepting my foolishly high offer again, fiend. Now if you’ll excuse me, I have to go pay $1100 for the body of a Camaro.

Lest you think ridiculous behavior is confined to Kentucky, you should probably know that effete, neurotic prisses do crazy things, too. I know, because I read Dear Prudence, Slate’s advice column for autistic space aliens who have just woken up in human bodies. This week’s top question—and by “top” I mean, “most bizarre”—comes from a reader who gave his friends tickets to the local aquarium, only to find them making fun of it on Twitter and Facebook a few hours later. Personally, the aquarium is one of the few things I won’t make fun of, but the recipients of the tickets posted pictures of themselves “ridiculing the animals,” which they described as “retarded, gimpy things.” See, that’s why it wasn’t cool for elitists to make fun of dumb fat people before—it doesn’t come off right when you’re winning. If they had gone to the aquarium and found themselves imprisoned behind eight inches of glass while manatees pointed out weird parts of their bodies to manatee children, their mean Facebook comments would have been hilarious.

In case that analogy wasn’t enough, here’s another instance of the rhetorical dangers of winning: newly-minted Maryland Representative Andy Harris, who rode to office on his pledge to resist Obamacare, is upset that his congressional health care plan won’t take effect until February 1. At an orientation session for new congressmen, Harris—an anesthesiologist—demanded to know what he was supposed to do without health insurance for 28 days after his swearing-in. Harris is apparently unaware that most employee health plans don’t kick in until the 91st day of employment, assuming they exist at all. Doctor Harris then asked, by all reports innocently, if he could purchase insurance from the government to cover the gap. In January, this man will take his seat as a United States Representative. His primary goal is to repeal Obamacare.

It’s almost as if Harris got his ideas from some higher conservative authority and not by thinking about them. While the rest of the country was busy doing incredibly stupid things or organizing congressional campaigns around ideas they heard on television, David Frum was thinking. The Times editorial he came up with, detailing what he sees as the epistemic threats faced by the re-empowered Republican Party, is maybe the best thing I’ve read in that newspaper all year. Read it, read it, read it, but here’s maybe the best part:

Non-Tea Party Americans may marvel that any group can think of itself as egalitarian when its main political goals are to cut off government assistance to the poorest and reduce taxes for the richest. But American populism has almost always concentrated its anger against the educated rather than the wealthy. So much so that you might describe contemporary American politics as a class struggle between those with more education than money against those with more money than education: Jon Stewart’s America versus Bill O’Reilly’s, Barack Obama versus Sarah Palin.

David Frum is the smartest conservative in America. I hope they exile him to the same Alaskan island as me, so we can weep and play the organ together.