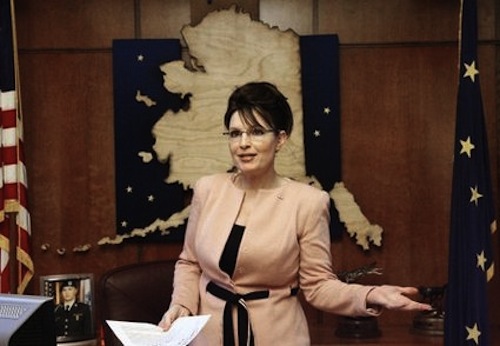 Sarah Palin does her impression of Alaska.

It’s been a while since we’ve discussed the perambulations of Sarah Palin through the American psyche, maybe because she seems to be fading, just a little, into the background insanity of contemporary discourse. Whenever someone brings her up I’m filled with fear and resentment, sure, but lately it’s rare that I find myself thinking about her on my own. She hasn’t made up a word or a fact about pending policy decisions in like ten weeks, and I almost started to forget about her. That’s exactly the kind of thing that at least one multimillion-dollar organization is designed to prevent, and now that the midterms are over, Sarah Palin has come roaring back. The original plan was to have her say “cunt” on national television—possibly to Gwen Ifill—but instead she wrote a book. And based on the passages leaked to Gawker and The Daily Beast, it’s a goddamn masterpiece of irony.

Never mind the little stuff, like her claim that “because the new father wasn’t there until the end of Bristol’s labor, I helped deliver Tripp.” By “helped deliver Tripp,” she means she stood in the delivery room while a trained obstetrician delivered Tripp, in much the same way that the dog helps you cook bacon, but whatever. Never mind even the big stuff, like her argument that it’s unfair to accuse conservatives of attacking Obama because of his race:

This tactic is of a piece with the shameful tendency on the left not simply to declare their opponents wrong, but to declare them evil. Conservatives and liberals don’t have honest policy disagreements, this strategy says; conservatives are just bad people.

So says the woman who coined the phrase “real Americans” and has connected virtually every conservative policy point in history to the will of God. But that’s not important right now. The book is called America By Heart, not America By Reasoned Argument. The important thing about the leaked passages from Sarah Palin’s new book is her opinion of televised talent shows:

Do you ever wonder where the producers of American Idol come up with the seemingly endless supply of people who can’t sing but are deluded enough to get up in front of a national television audience and screech out a song anyway?…I think a large part of the appeal of American Idol is the spectacle of Simon Cowell pouring cold water over the heads of these young people. Cowell can be a little harsh at time, but he upholds the highest standards, and something in us recognizes and responds to that.

Now that is some grade-A irony, right there. The woman who accepted the Republican nomination for Vice President after one year as governor of Alaska and six years as the mayor of a city of 10,000—who told Katie Couric that she reads “all newspapers” and unleashed a stream of gibberish when confronted with any concrete policy questions—can’t believe how some people think they can sing.

I suppose it’s not a complete lack of self-awareness unless you marvel at the absence of self-awareness in others. But what’s that? You say that’s some level-two, interpretive irony, and you’re more of a literal, common-elements kind of irony person? Good news for you, then, because Palin’s daughter just happens to be on a nationally televised talent show, too. And she sucks:

Really? That’s “definitely the most frightening thing [you’ve] ever done in [your] life?” More frightening than the time you had to sit down with John McCain and talk about whether you were going to get an abortion? In fairness to Bristol, it was probably not her idea to go on Dancing With the Stars at age 19 with a toddler, no performance experience and the kind of can’t-do attitude that characterizes a teenage girl. In fairness to the timeless art of dance, though, Bristol sucks.

She keeps winning, in a travesty of democracy not seen since that white kid who sang like Frank Sinatra kept knocking black girls off American Idol until he cried and begged to be put down. Or maybe it has been seen since then. There’s something about those Palins—some psychological umbrella that keeps Simon Cowell’s bucket of cold water from ever hitting their big, shining eyes. In the two years since she first said “you betcha” on national television, Sarah Palin has published two books about herself and/or America, hosted two cable television shows, and sent her daughter on a banshee tour of competitive dancing and telling teenagers whether they should do it. Maybe there’s something about her that America needs. Maybe we just need a Simon Cowell, but for the time being we are a nation of Paula Abduls.