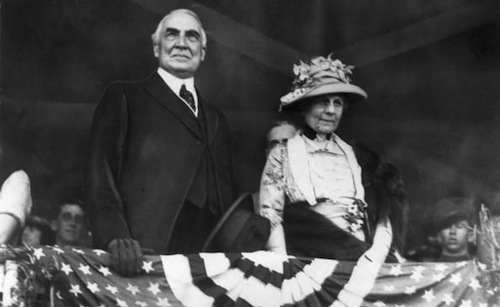 Back in 1920, self-made newspaper publisher and beloved milquetoast Warren G. Harding ran for President promising a “return to normalcy”—the resumption of American life as it was lived before World War I. Ask Scott Fitzgerald how that worked out. The past is past, and its very passage confirms our endorsement of the process that carries it away from us. Even when we return to normalcy—or, if you’re a jerk, “normality“—we do so remembering the weirdicy that came before, and we are changed. Today is Friday, and United has returned me to Missoula in a mere 13 hours. My fish are somehow alive, thanks to Ben al-Fowlkes, and I am standing at my desk as if nothing happened. Fortunately for the links, however, a bunch of stuff went down. Won’t you settle in with the uneasy memory of one who has woken from a dream with me?

I mean settle in with me with the uneasy memory of one who has woken from a dream, not the unease of one who has woken from a dream with me. Accuracy counts, as Sean Hannity discovered when he lost approximately half his audience after the November election. It turned out telling everyone that A) Mitt Romney would definitely win and B) they should crow smugly over the certainty of this fact with their friends and coworkers left people feeling a little used. Say what you will about its transparent mendacity for everyone else: the “News” in Fox News still means something to its viewers. Also, I am frightened by the phrase “viewers 25-54, who are prized by advertisers.” That leaves very few among us whom those people do not prize, and it’s kind of creepy.

Meanwhile, in a medium that is actually growing, Andrew Sullivan has decided to make the Dish an independent publication. His explanation of why and how makes for a fascinating consideration of how internet publishing might be monetized and—this is the part I like—even allow writers to make a living without editors and publishers. I don’t know if you’re aware of this, but Combat! blog does not generate a lot of income. I do it as a sort of practice, somewhere between jogging and TM, and it’s worth it. It would be even more worth it for money, though, and I daresay that the possibility for writers to support themselves through self-publishing is historically unprecedented. Those of us who like to type live in exciting times. Also, it’s going to be sad when the Dish goes out of business.

It is better to go with the historically precedented means of success, such as rigging the game. The Princeton Election Consortium has been doing some very interesting work on gerrymandering, the process of drawing districts in ways that alter the likely outcomes of elections. It’s a multi-part series, but here’s the part where they estimate that four million Democrats were disenfranchised in November. If you’re not familiar with the issue, the news that most states use partisan election boards to draw their districts is kind of a shock. So is the notion that Republicans won more than half the seats in the House with less than half of the votes cast. I boldly predict that a left-tending public and a right-tending GOP will make gerrymandering the defining political issue of the next ten years.

Also, it will be hard to fix. In addition to giving us all a really superior recipe for black beans, Mark Bittman has written a fine piece in the Times about the need for food reform. I don’t know if you noticed how everyone is fat now, but I have recently been in Des Moines, Denver, Detroit and Washington DC, and the differences are startling. How we eat isn’t just implicated in how we look, either; it’s an environmental issue, a social justice issue, and probably an ethical issue. It’s also one we can address only gradually—probably, as Bittman says, over the course of several generations. Leave it to a cook to have a clear-eyed view of how long things take. Also, I accidentally violated my no-comments-reading policy and looked at the opinion of the lady who says—without evidence or even argumentation—that it will be much easier to change the way everyone purchases and consumes food than it will be to regulate via the USDA. The longer you look at that comment/photo combination, the more perfect it seems.

Same goes for this:

If you want me to like your hip hop song, put atonal sounds in it. Now go forth and produce several hip hop songs for my enjoyment.