A rendering of the Hemnet Home by Tham & Videgard of Sweden

Plato knew what was up: while the apparent world is disorganized and forgettable in its particularity, meaning lives forever in the world of forms. Right now, I’m typing from my Chinese knockoff of a Le Corbusier recliner. It could support my gamey shoulder a little better. But the form of a chair—oh man, that thing is perfect. It is, by definition, that which supports my whole body in a sitting position, its function and structure unsullied by actualization. Today is Friday, and every form can be perfected. Won’t you transitive verb phrase of contrasting literal and figurative meanings with me?

First, the good news: Swedish architects have designed the statistically most desirable house, and it delights me. The Hemnet Home, named for Sweden’s most popular real estate website, is “based on studying 200 million clicks on 86,000 properties that were on sale between January and October 2014.” It’s got 3.8 rooms, .95 balconies—be careful in the corner, I guess—an open-plan kitchen, and 1.4 guest bathrooms. Normally, design-by-analytics is a disaster, but the Hemnet Home is exactly the kind of structure I’d like to live in. Just look at the dope veranda off the master bedroom: 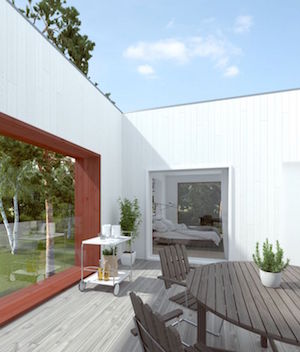 Doesn’t the blog feel more open and light now? Also, huge quantities of snow are going to accumulate against the bedroom doors, but whatever. My 1.4 guests can shovel.

Of course, for every form perfected to my satisfaction, two are perfected to my utter horror. For example, internet writing: it’s kind of journalism, kind of criticism, and kind of humor, but it doesn’t live up to the standards of any of those. It responds to information with a tone. Take Adam Weinstein’s piece for Gawker, If You Didn’t Read the Montana Newspaper This Week, You’re Missing Out. He means the Missoula newspaper. Weinstein’s post is basically a copy-paste of information from the Missoulian that he found funny, beginning with the story of a teenager who accidentally shot his friend. He interlards long excerpts from the newspaper with his own commentary, which is not quite funny but derisive in a way that resembles humor. On the likelihood that the aforementioned teenage shooter will be tried:

Experts expect the teen to defend his actions under the state’s “castle doctrine” of self-defense, as in “a man’s home is his.” It’s a risky gambit, as castles tend not to have many windows. And windows tend not to be hard to look through. But you never know, because Montana.

This commentary adds neither information nor insight, and the jokes are unfunny, because Gawker. But at least Weinstein attempts a jocular tone. I’d rather that than the intersectional language of self-important seriousness. Behold the beautiful marriage of conspicuous correctness and clickbait structure that is You Know Those Common Objections to They Pronouns? Here Are 9 Simple Facts to Shut Them Down. In answer to your first question, no I do not. The second question, of course, is “How can I evaluate these nine simple facts1 if I don’t know anything about the author?” Fortunately, they begin with a note:

I want to name where I am coming from in this piece. I am a non-binary, genderfluid, genderqueer, white, middle-class, AFAB, thin person, and that affects my work, although I do my best to enrich my knowledge with other perspectives.

I don’t like the idea of a thin person telling me which pronouns to use, but okay. After beginning the first sentence after the author’s note with “My name is Adrian Ballou,” they get to the facts. In response to the argument that using “they” to refer to one person is ungrammatical:

This is people’s number one objection to they/them/their pronouns. Like, “My sense of elitist grammar is way more important than respecting who you are.” Well, I love to destroy your sense of grammar by being myself. It’s part of my nefarious non-binary agenda…For those of you who care about what elitist grammarians have to say, the singular they has even become recognized as “correct” English by the Oxford Dictionary. But for the record, our pronouns would still be legitimate even if no one supported the grammar behind it.

That’s not an argument; that’s a series of ad hominem attacks interspersed with assertions of your own importance. I assume that this approach to discourse will only become more popular as I get older, and I will correspondingly become more of an insane crank. I can’t believe my elitist sense of grammar is being destroyed by this genderfluid AFAB stretch honky’s very selfhood.

It’s a good thing that the only writing that matters it the good stuff. People who hate to think can fill the internet with bold claims that being something is more important than saying something, and it will diminish the quality of, say, Karl Ove Knausgaard’s essay on Anders Breivik not one whit. You may remember Breivik from 2011, when he killed 69 children at a summer camp in the name of Norwegian ethnic nationalism. Knausgaard believes that Breivik achieved this act of supreme dicketry by constructing a psychological narrative in which he was the central figure, a hero moving among mere symbols. Knausgaard quotes another author’s description of Breivik’s behavior immediately after the shootings, when he had been apprehended by police:

Finally, he was standing there in a room of uniformed men in his underpants. He started posing, trying to look macho. Now he was all for having his picture taken. He looked into the camera and thrust out his chest. His hands were clasped at one hip while he held his body taut in a classic bodybuilding pose, to make his muscles bulge as much as possible.

I submit that narcissism is the scariest quality to witness, because it could happen to you. It seems our theme has drifted from the perfection of forms to the terror of the expanding self. Don’t spend too much time thinking about who you are. Don’t be somebody; do something. Your self will let you down. Be like MF Doom: an unknown quantity, a shifting name with no face, a cipher for the work.