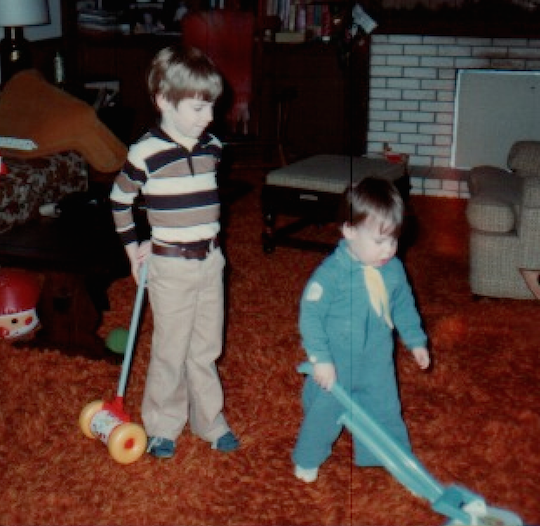 The author, who from an early age loved to watch other people work—photo by Suzan Brooks

Is there anything more satisfying than hard work? Can any force build a stronger character than honest labor daily undertaken? Work nourishes the soul—not my soul, of course, but the souls of others. In these times of national struggle, the only clear way forward is for other people to roll up their sleeves, take hold of their bootstraps and, with whatever hands remain available, get to work. I am prepared to do whatever it takes to teach other people the value of work, whether that means opposing welfare or cutting my own taxes. Today is Friday, and honest labor sets everyone free except me. Won’t you rediscover the joys of work by yourself?

First, the good news: a few bold conservatives stood up for the will of the majority against the tyranny of a 54-46 vote, although in the end the Montana House wound up passing Medicaid expansion. Allies of Big Hospital said it was about insuring the working poor, but Rep. Nick Schwaderer (R-Superior) called a spade a spade:

A bankrupt federal government with a stack of cash, and we’re supposed to be grateful. All this bill is is a gimmick to give hospitals, pharmacies and other providers a bunch of money and purchase the vote of the sick, the poor, the vulnerable. Vote no.

Can you believe the audacity of politicians who exploit the sick, the poor, the vulnerable by giving them what they want? Frankly, that kind of pandering is disgusting. I’m not the only one who is shocked by the actions of the House yesterday. Americans for Prosperity released the following statement, in which they maybe vow revenge:

We are deeply disappointed in the legislature’s decision tonight to expand Medicaid. This decision stands directly against the voices of millions of Montanans who have made it clear that they do not want any more Obamacare. At it’s1 core, this bill is no different than the governor’s bill. Yet, many legislators tonight voted in favor of the bill, pretending that it’s something that it’s not. Legislators ran for office promising to support free-market policies, but tonight they decided to break those policies.

Even more appalling than legislators’ votes is the duplicitous tactics they used to pass it. Rather than engaging the democratic process, they turned to legislative jockeying and procedural loopholes to force their will on the people of Montana. It’s unacceptable. We’ll be educating citizens to be sure they are held accountable for their broken promises.

First of all, it’s impressive that “millions of Montanans” raised their voices against Medicaid expansion, given that the state population is just over one million. Second, the “legislative jockeying” to “force their will on the people of Montana” involved moving SB 405 out of committee so it could get a floor vote. But whatever—it passed. The important thing is the legislators in Helena got their stuff together and implemented a policy I liked without—and this is crucial—my having to really do anything.

It feels good to work for what you get, but it feels even better to just get it. On an unrelated note, no one can find Valerie Stamey. You may remember Ms. Stamey as the Ravalli County Treasurer groundlessly accused of not doing her job when her office coincidentally stopped functioning as soon as she got there. The county is suing Stamey for 29,000 in damages, but the lawsuit has stalled because they’ve been unable to serve her. I quote the Missoulian, although I also edit for comma usage:

Stamey’s husband Richard told officers she was in another state but wouldn’t say which one.

Stameys! They’re always one step ahead. Probably she’s in a job interview right now, explaining that she totally has experience running a dog spa. You can have that script idea for free.

It’s also possible she’s teaching public school in Kentucky. Professor James Krupa has written this fascinating essay about teaching evolution at the University of Kentucky as part of a biology course for non-majors. As you might expect, some of them believe they know about it already. Maybe the most interesting aspect of this essay is the confidence that a certain kind of ignorance brings to the college environment: for example, the student who declared that the Baptist sect of Christianity was older the Catholicism, because the Bible mentions John the Baptist. It’s hard to correct an ignorance whose fundamental precept is that your knowledge is false.

People need to defer to experts. For example, the hip hop community should defer to my obsessive analysis of Action Bronson lyrics, because who else is using the word “spondee” in their music reviews? Intrepid editor Errka Fredriksen cut that piece down from 1200 words, because she is not insane. Email me if you want to read the full-length version, and I will add you to a list of people who need to get jobs.