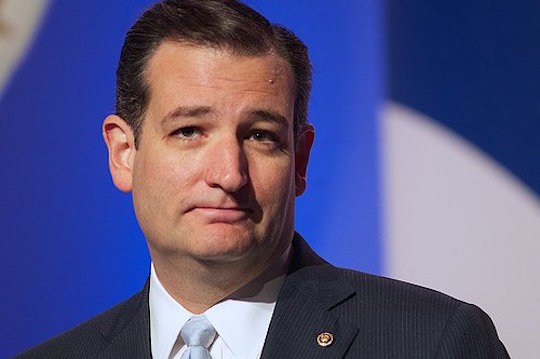 In case you’re wondering what kind of campaign Ted Cruz plans to run, last week he told the Network of Iowa Christian Home Educators that homosexuals are waging “jihad” against Bible-believing Christians. Quote:

Look at the jihad that is being waged right now, in Indiana and Arkansas, going after people of faith who respect the biblical teaching that marriage is the union between one man and one woman. We need to bring people together to the religious liberty values that built this country.

For reference, the timeline of this war or struggle against unbelievers begins with Bible-believing Christians advancing “religious liberty” laws that would exempt them from laws prohibiting discrimination against gay people. The amount of doublethink1 necessary to cast objections to those laws as a jihad against Christians is kind of breathtaking. Video after the jump.

Here’s candidate Cruz explaining how likening gay Americans to a foreign religious army really has the potential to bring people together:

Three things about this video impress me:

Item (3) is perhaps the most thrilling from a paranoiac’s standpoint. When Cruz says that “this election needs to be about bringing together that consensus again”—the consensus against gay people—he basically tells the audience that his plan is to pander to bigots. It’s a bold move, and utterly terrifying.

Probably, though, the most interesting element of Cruz’s remarks is his interpretation of the First Amendment, which reflects a contortionist’s skill. You can tell Cruz has been reasoning away from the truth for a long time. Here he is on how resistance to legalized discrimination against gay people violates Christians’ civil rights:

It used to be Democrats and Republicans, they might disagree on marginal tax rates. But when it came to the First Amendment, we all stood together and said of course, every one of us has a God-given right so seek and out worship god and to live according to our faith and our conscience and our beliefs.

Another way to put that is to say that Democrats and Republicans both used to demonize homosexuals, because the church told them to, but now evangelical Christians only control one party. But if home schooling enthusiasts have taught us anything, it’s that there are only certain historical narratives they want to hear. That one kind of makes it sound like Christians persecuted homosexuals, with the anti-sodomy laws and the conversion therapy and whatnot.

The version where Christians are the victims—the one where discriminating against homosexuals is a core element of their religious practice, and gay resistance is therefore discrimination against them—obviously sounds better. It’s just, you know, not true. You might as well say that integrating Central High School discriminated against whites by violating a core element of their race, not wanting to be around black people.

The same Old Testament that forbids man to lie with man also instructs its adherents to practice slavery and human sacrifice. Nobody claims that laws against burning Midianites and selling their virgin daughters violate Christians’ religious liberty. None of these bogus “religious freedom” laws was necessary in the 19th and 20th centuries, when gay people lived under state sanction and public censure. It is intellectually dishonest to cast the progress of gay civil rights as a war of religious persecution against the people who abrogated those rights in the first place.

Somewhere in Texas, Ted Cruz’s ears prick up. “Did someone say intellectual dishonesty?” he asks an aide. “Yes sir,” she says, “we all did, just now.” Three weeks into his candidacy, Cruz has proven himself willing to say any outlandish thing to anyone fool enough to believe him. This quality makes him the most infuriating of the Republican candidates,2 but it also makes him the most fun. Sooner or later, he is going to fuck up.

The thing panderers have in common, I think, is that they underestimate their audiences. They win over the dumber half of the people they are pandering to, and they think they’ve got everybody dialed in. Sooner or later, though, they say something a little too cynical, or they become popular enough that the dumb half of their original audience becomes a negligible fraction of their new one. Ted Cruz is a liar in an age of liars, and eventually he will get his comeuppance. I hope he doesn’t keep us waiting long.