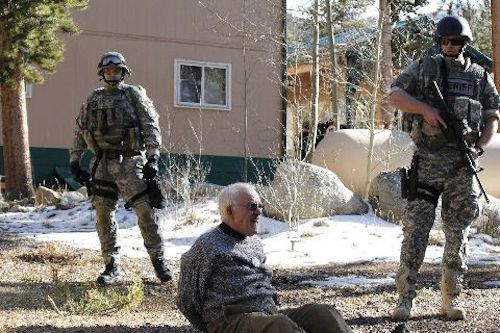 A SWAT team assists in the eviction of a Colorado couple from their foreclosed home.

You can’t have a free country just by letting people do whatever they want. “Your right to swing your arms ends just where the other man’s nose begins,” said Zechariah Chafee, and he makes a good point: how am I to swing my arms if people keep getting their noses in my way? The problem with freedom is that the lower orders will always try to strip it from their betters. Free to have a nice town where I can walk along the river in peace? Nope—some derelict is lying on the bank, spoiling my view. Free to choose my religion and uphold its values? Nope—gay hippies are taking a break from rapping to smoke marijuana out of each other’s buttholes. These people are undermining the country with their laziness and dissipation, and there’s only one way to preserve American liberty: incarcerate them with paramilitary assault teams. Today is Friday, and freedom isn’t free. Won’t you enjoy membership in a class that can still afford it with me?

First, the good news: a yearlong study of police militarization by the ACLU has found that only 7% of SWAT team deployments are “for hostage, barricade, or active shooter scenarios.” Eighty percent were to serve search warrants, and 62% were to conduct searches for drugs. Props to Sam Mendozaaaaaa! for the link. In theory, there’s no reason why the police shouldn’t execute all of their duties with overwhelming force that makes resistance unthinkable. Probably, they should wear robotic exoskeletons with chainsaws and machine guns until such time as we can breed a generation of telekinetic officers able to kill people with their minds. In practice, maybe there’s a reason we don’t use the army to enforce the law on US citizens. The ACLU contends that the police are becoming more like an army every day—except some of them have also declared themselves private corporations immune to open records laws.

Of course, kicking in people’s doors and pointing automatic weapons at them is only the first step to preserving freedom. Once you’ve identified the Americans who can’t handle liberty, you have to put them in jail. The United States enjoys the highest per-capita incarceration rate of any country in the world—at worst the second-highest, depending on what kind of data we can get out of North Korea. Plenty of prisoners are serving mandatory sentences for drug possession, but there’s always room for one more. Timothy Egan has written a scathing indictment of the Department of Justice’s indictment of an elderly couple who grew medical marijuana on their Washington farm—legally, at least on the state level. The feds still forbid growing dope whatever your state legislature says, though, and they’ve got the helicopters to find it. Fortunately, our nation’s many champions of states’ rights are fighting efforts to give people health insurance.

The only problem with jail is that it’s too nice for some people. On Wednesday, Missoula city councilman Jon Wilkins complained that jail is a step up for the city’s homeless—a place to shave and watch television, “a luxury of life if you’re living on the street.” They don’t care about fines, either, since they don’t have any money. The city council continues to search for a way to punish homelessness out of existence, but with no municipal addiction treatment or mental health services, a solution seems far off. Wilkins suggested that street people are being bused here from cities like Spokane, which give them free tickets out of town. There’s still no evidence to support this hoary myth, but Wilkins believes it anyway. “I’d love to give ’em a bus ticket back to Spokane,” he said. Also, my girl Keila Szpaller consistently delivers great coverage of city matters in The Missoulian, but she muddles the line between objectivity and boosterism with this one—particularly when she refers to people who can’t afford to live indoors as “troublemakers.” This story about how we might use jail to fight poverty could stand a dissenting source.

While we’re complaining about the close cooperation of government and business interests, though, we should not lose track of what authoritarian corporatocracy really looks like. The Islamic State of Iraq and Syria, for example, issues annual reports on how many people it has killed and how much money it’s taking in. Call it the MBA approach to terrorism, or terror-statism, or whatever the hell this black-clad Islamic fundamentalist organization and protection racket is. I grew up with Cobra in cartoons, and now they’re running around the Fertile Crescent, a place that also turns out to exist in real life. Fun fact: ISIS doesn’t refer to itself as the Islamic State in Iraq and Syria; it uses the Islamic State in Iraq and al-Sham, a region organized as a caliphate during the seventh century. As Ben “The Enabler” Fowlkes pointed out, you know an organization is reactionary when it uses geographic terms from 1300 years ago.

ISIS is totally a real state, though, and not just a bunch of assholes with money and guns. And America is the freest country in the world, also as measured in total possession of money and guns. And life is a glorious cycle of song, a medley of extemporanea; and love is a thing that can never go wrong; and I am Marie of Romania.