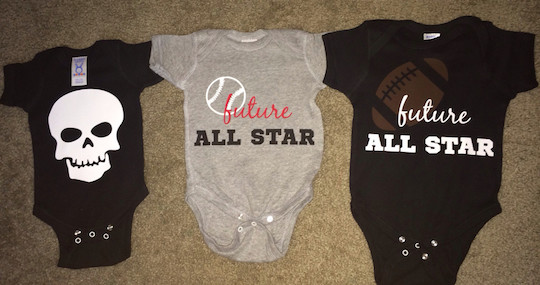 The good news is that gun sales are booming, thanks to an influx of “women and first-time buyers” into the market. The even better news is that increased gun sales don’t necessarily correlate to increased gun murders. The bad news is that’s because people are terrible at intentionally shooting things. Watch what happens when regular people try to use handguns in self-defense, the Washington Post invites us, then treats us to footage of civilians in simulations standing numbly before they get shot or shooting at people who are running away. Pulp Fiction it is not. Props to Kelly for the link.

It could be worse, though. You could sit next to Kim Davis. Acts of genius seem obvious in retrospect, so it makes perfect sense someone made a satirical Twitter account for the woman who shares the Moorehead County Clerk’s office in that ubiquitous photo. But it’s not just a clever idea. There’s also room for trenchant commentary:

ALSO, EVERYONE IN CHARGE IS RELATED TO EACH OTHER #KimDavis https://t.co/3BTEBk5EPB

I knew Kim Davis’s mother had also been county clerk, but I did not know her son works in that office, too. That article also includes Ted Cruz’s assessment that “Today, judicial lawlessness crossed into judicial tyranny.” Which aspect of this elected official’s refusal to abide by a Supreme Court decision suggests the judiciary is lawless? I’m not even going to address the second part, because when Ted Cruz says “tyranny,” I picture him talking to the mirror with his shirt off.

This country doesn’t need eggheads like Cruz to lead it. It needs businessmen. That’s why the Iowa Board of Regents selected as the new president of the University of Iowa J. Bruce Herreld, the candidate whom more than 97% of those polled said was unqualified to hold office. Herreld has no experience in academic administration. He has lectured at Harvard and Northwestern, but mostly the former IBM executive is known as a turnaround guy. His incoherent yet ambitious job talk Q&A suggests he has plans to turn around my alma mater. I love the University of Iowa with all my black heart and gold pants. Now I am scared.

“Scared” is a relative term, of course. For example, I am not too scared to repeatedly watch this clip of Norm Macdonald silencing a comedy club by telling the truth, again:

A pox on whoever cut those stupid memes into this clip. We’ll talk about the stupidity of memes Tuesday. But Norm Macdonald is right: the premise of the Bible/Harry Potter joke is flawed, and not just because JK Rowling has publicly declared the series an analog for the New Testament. When Macdonald says this true thing, everybody acts like he is spewing gibberish. Don’t think about that, or you will get sad. Instead, read this interview with Macdonald, which suggests that age has taken him from funny and weird to funny and irascible. It’s usually not the first quality that stays the same.