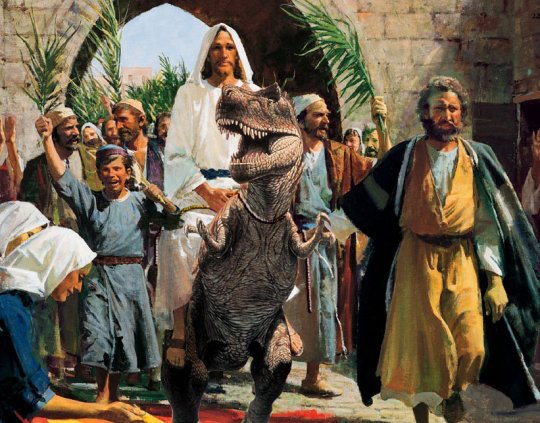 Jesus rides into Bethlehem on a dinosaur (Exodus 4:20)

At this turning point in modern civilization, we must throw off what we merely wish were true and cleave to what is absolutely certain. Only by reasoning scrupulously according to the evidence at hand can we hope to grapple with the complicated problems of 21st-century living. Philosophy, sociology, climate science—these are exciting realms of conjecture, but in the end, they are only castles made of sand. Give me hard facts and established knowledge, i.e. the Bible. Today is Friday, and we can’t afford to live in a fantasy world much longer. Won’t you embrace realism with me?

First, the good news: the streets of Moscow will no longer be a Newton’s Cradle of colliding cars, because Russia has ruled transgender people unfit to drive. Fetishists, exhibitionists, thieves and gamblers will also have their licenses revoked. “The decisions are aimed at reducing deaths from road traffic accidents,” says an official statement, which makes sense as far as that goes. Still, the exact link between “sex disorders” and car accidents remains unclear—provided you’re willing to ignore the word of God re: people who have dicks and wish they didn’t. Now who doesn’t know causality?

Meanwhile, Tanzania has banned witch doctors after a series of attacks on albinos, whose body parts are believed to bring good luck and wealth. That’s why all the albinos in Tanzania are rich and not the subject of arbitrary, violent attacks. It turns out the witch doctor community is pretty powerful there, as evidenced by this woman who had to go into hiding after exposing their practices. In case you’re wondering how a witch doctor improves your financial outlook, I quote:

I posed as a businesswoman who wanted to get rich and “consulted” 10 witchdoctors. The consultations included talking to a hedge and telling my problems to a chicken.

That’s the funny part. The less funny part is the network of witch doctors, armed robbers and corrupt police that helps secure the limbs and blood of albinos for magic charms. Come on, Tanzania. Just because your grandma said it doesn’t mean it’s true.

Meanwhile, in the enlightened West, Frank Bruni is fed up with hearing his homosexuality called a threat to other people’s religious liberty. Did you know Frank Bruni is gay? Me neither—he never writes about art history or mimosas or anything. But he is sufficiently angry about laws that frame homophobia as religious expression to merit quoting at length:

According to many of the Americans who still cast judgment on us, our “I do” somehow tramples you, not merely running counter to your creed but running roughshod over it. That’s absurd. And the deference that many politicians show to such thinking is an example not of religion getting the protection it must but of religious people getting a pass that isn’t warranted. It’s an illustration of religion’s favored status in a country that’s still working out this separation-of-church-and-state business and hasn’t yet gotten it quite right.

That closeted homosexual speaks the truth: religious beliefs are given favored status in American discourse, and we seem to be in one of those moments when they are favored in policy, too. But I’m sure creating a protected class of ideas and then letting anyone declare any idea to be of that class won’t cause problems. The important thing is that we respect other people’s professed beliefs and not, you know, their choices.

I don’t know about you, but I only get my wisdom from people old enough to have witnessed the events of the Bible firsthand. That’s why I was psyched to read this speech at the National Book Awards by Ursula Le Guin. As you know, Le Guin writes fantasy and science fiction, so nothing in any of her books is real. Before we get any more sarcastic, let’s throw this over to her:

I rejoice at accepting [this award] for, and sharing it with, all the writers who were excluded from literature for so long, my fellow authors of fantasy and science fiction—writers of the imagination, who for the last 50 years watched the beautiful rewards go to the so-called realists. I think hard times are coming when we will be wanting the voices of writers who can see alternatives to how we live now and can see through our fear-stricken society and its obsessive technologies to other ways of being, and even imagine some real grounds for hope. We will need writers who can remember freedom. Poets, visionaries—the realists of a larger reality.

What we call realism is a fantasy, too. The real asserts itself. It is discovered, not named. The stories we describe as “realistic” document only how we want to be. Now watch these Russian dash cam videos.